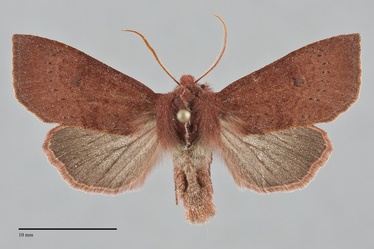 Orthosia transparens is a medium-sized (FW length 15–17 mm) bright red-brown moth that is common in the western part of our region during early spring. It has markings limited to dark gray in the lower reniform spot and spots on the veins at the postmedial line. The forewing has a slightly pointed apex and appears stubby and broad. The ground color is uniform bright red-brown, slightly darker at the outer margin in some individuals. The transverse lines are barely darker, double, and filled with the ground color. The postmedial line is followed by a series of paired gray spots on the veins in most specimens. The median line is faint in a few individuals but is absent in most. The subterminal line is absent. The orbicular and reniform spots are very pale, but the lower half of the reniform spot is filled with gray and forms the darkest mark on the forewing. The claviform spot is absent. The hindwing is gray with a slight red tint, darker veins, and a distinctly red fringe. The head and thorax are the same color as the forewings. The anterior thorax has a distinct median crest with a small tuft. The eye is covered with fine hairs. The male antenna is weakly bipectinate, approximately 3x as wide as the central shaft. The female antenna is filiform.

Larva is smooth, mottled reddish brown to greenish brown, but lacks the black prothoracic shield of O. pulchella.  It is illustrated by Miller & Hammond (2003).

Orthosia transparens is found throughout the western part of our region as far north as southwestern British Columbia. It does not occur east of the Cascade Mountain crest.

This species is limited to California outside of the Pacific Northwest. The range extends south to the border with Mexico.

This species is a foodplant specialist feeding on evergreen Ericaceae, but may avoid feeding on manzanitas.  Foodplants include salal (Gaultheria shallon), madrone (Arbutus menziesii), and rhododendron (Rhododendron macrophyllum).

Orthosia transparens is a spring-flying moth like most other members of the tribe Orthosiini. It has been collected from February through May in our region. It is nocturnal and comes readily to lights.