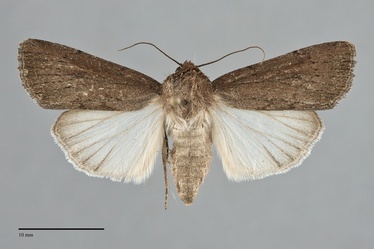 Tesagrotis amia is an even dark gray-brown noctuid moth with white hindwings with dark veins and forewing markings limited to thin, black transverse lines. It is one of the largest species in the genus (FW length 17 - 18 mm) and occurs in areas with mountain mahogany (Cercocarpus spp.) in southeastern Washington and eastern Oregon. The forewing is even dark gray-brown, darkest brown toward the costa and grayer toward the trailing margin. A few specimens are slightly reddish. The markings are limited to the thin black antemedial and postmedial lines. The antemedial line is irregular and is oriented slightly obliquely across the forewing. The postmedial line is usually darkest. It is scalloped and smoothly arced toward the outer margin. The reniform spot is visible as a faint dark smudge in some specimens. The hindwing is white with dark gray distal veins and marginal shade, but lacks a discal spot. The marginal gray is more extensive in females than in males. The head and thorax match the forewing and lack darker marks, including on the collar. The male antenna is beadlike.

This species can be identified by its smooth dark gray-brown forewing that lacks markings other than the lines bordering the median area. Other moths with similar colored forewings, like Euxoa intermontana, have well-defined spots. Other similar Tesagrotis species, particularly Tesagrotis atrifrons and Tesagrotis piscipellis, are redder brown and have black on the head or collar.

This species is common and widely distributed in dry forests and woodlands of the southern Rocky Mountains. It is found in open shrubland of mountain mahogany at middle elevations in the Pacific Northwest, and is usually uncommon and local in this region.

The range of this species is spotty in our region. It has been found in the Warner Mountains of south-central Oregon, in the Blue Mountains of south-eastern Washington and eastern Oregon, and in the mountains of southern Idaho. It also occurs in western Montana. Most of the Pacific Northwest populations were discovered after the publication of the Noctuini fascicle of the Moths of North America series (Lafontaine 1998).

This species is most commonly found in the southern Rocky Mountain region from eastern Nevada and much of the Four Corners states. It also occurs in eastern and northern California.

No information is presently available regarding larval foodplants of this species, but it probably feeds on mountain mahogany (Cercocarpus spp.) in the Rosaceae based on habitat associations in the Northwest.

The adults fly during the summer and have been collected from late June through August in our region. They are nocturnal and come to lights.