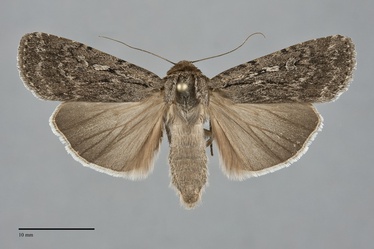 Spaelotis unicava is a rare Spaelotis species in our region that has only been collected a few times in south-central Oregon. It is a medium-sized moth (FW length 17 - 20 mm) with a streaky gray-brown forewing and dark gray hindwing. It is one of four almost identical Spaelotis species that occur in the Pacific Northwest (our fifth species, Spaelotis clandestina, has darker brown forewings and lighter hindwings than the other species). The forewing is elongate and gray-brown in color with thin black veins on the distal forewing. A thin black basal dash is variable in length, ranging from short to reaching the antemedial line. The lines are slightly darker than the ground color and filled with lighter gray-brown. The antemedial line is jagged, especially near the trailing margin and occasionally touches the postmedial line across the median area. The postmedial line is abruptly drawn toward the base at the costa, laterally convex to the fold, and then nearly straight to meet the trailing margin at a right angle. The pale subterminal line is powdery light brown-gray, usually complete across the forewing but occasionally only present near the apex. The orbicular spot is black, oval or shaped like a long bar, and touches the reniform spot in a few specimens. It is filled with the ground color, slightly lighter brown, or light gray-brown. The reniform spot is thin and black with a thin lighter inner line. It is usually incomplete with only the medial and superior portion clearly evident. It is usually filled with the light gray-brown. The hindwing is dark brown-gray with slightly darker veins and discal spot and a two-toned fringe, white distally. The head and thorax match the forewing ground color. The male antenna is filiform.

This species tends to be slightly larger than the other similar Spaelotis species and has a fairly distinct pattern of forewing lines and spots that is most like that of Spaelotis havilae. Unlike the common species Spaelotis bicava, it does not have a form with orange tint on the costa. Spaelotis unicava females are easily identified by the presence of a deep rectangular unilocular pit on the posterior ventral abdomen (evident as a dark rectangle on the ventral image). Males can be identified by dissection but are best identified by association with the females.

This species is narrowly endemic to dry forest and desert habitats in California and the adjacent Great Basin.  It barely enters the Pacific Northwest on dry sagebrush steppe at low elevations in the Great Basin region of southeastern Oregon.

Spaelotis unicava has been found in Lake and Harney Counties in south-eastern Oregon.

This species reaches its northern distribution limit in southern Oregon. It has been most commonly collected in eastern and southern California, with a few records from the adjacent western portions of Nevada and Arizona.

This species is apparently a climbing cutworm that feeds on both hardwoods and herbaceous vegetation, and has been collected on Coleogyne ramosissima in the Rosaceae.

Adults are found in late spring and summer. The few Pacific Northwest records of this species are from late May, early June, and early August.