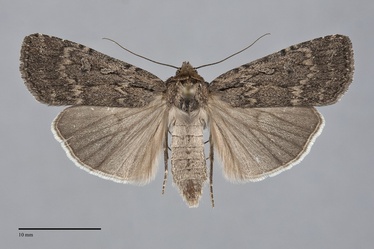 Spaelotis havilae is a medium-sized moth (FW length 15–19 mm) that occurs in south-central Oregon and flies during the summer. It has a streaky gray-brown forewing and a dark gray hindwing. It is one of four Pacific Northwest Spaelotis species that have an almost identical superficial appearance (our fifth species in the genus, Spaelotis clandestina, is darker brown with a lighter colored hindwing). The forewing is elongate and gray-brown. A thin black basal dash can be short or reach all the way to the antemedial line and the veins on the distal wing are dark. The lines are slightly darker than the ground color and filled with light brown or gray-brown. The antemedial line is jagged, especially near the trailing margin. The postmedial line is also uneven. It is drawn abruptly drawn toward the base at the costa, is laterally convex from the superior cell to the fold, and then nearly straight to the trailing margin which it meets squarely. The pale subterminal line is variable, often incomplete. The orbicular spot is black, oval, and touches the reniform spot in some specimens or is connected to it by a thin black line. It is filled slightly lighter brown than the ground color or light gray-brown. The reniform spot is usually incomplete, with only a segment of the black medial portion present but is evident due to its pale filling. The hindwing is dark brown-gray with slightly darker veins and discal spot and two-toned fringe, light distally. The head and thorax match the forewing ground color. The male antenna is filiform.

Spaelotis havilae is most likely to be confused with Spaelotis bicava, the most common Spaelotis species in its range, but is also nearly identical to two rarer species that also occur in southern Oregon and southern Idaho, Spaelotis unicava and Spaelotis velicava. All Spaelotis females are best identified by the size, shape, and placement of a set of shallow pits on the posterior ventral abdomen which lose their covering of loose scales after mating. Spaelotis havilae has four small pits that are situated next to each other near the tip of the abdomen. These are obviously different than the paired shallow pits of S. bicava and the deep unilocular pit of S. unicava to the naked eye. However, the four individual pits of this species are best separated from the curled pits of S. velicava under magnification. Spaelotis males are best identified by association with the females, but can also be distinguished by dissection.

This species is endemic to the Great Basin region, and is moderately common in dry, open ponderosa pine forests, juniper woodlands, and sagebrush steppe at middle to low elevations east of the Cascades.  It is also known from dry grasslands at low elevations in southwestern Oregon.

Spaelotis havilae is found in most of east-central and south-eastern Oregon and adjacent western Idaho south of the Blue Mountains. The most northerly record is from Wallowa County in the north-eastern part of the state.

This species has one of the more restricted distributions of any North American Spaelotis species and approximately half of its distribution is in the Pacific Northwest. It occurs in northern California and northern Nevada to the south of our region.

No information is presently available regarding larval foodplants of this species, but it is probably a climbing cutworm that feeds on both hardwoods and herbaceous vegetation based on related species.

The adults flight season is fairly long, lasting from early June to mid-September. This species is nocturnal and comes to lights.