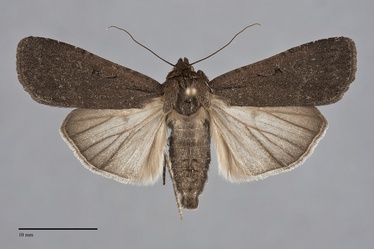 Spaelotis clandestina is the darkest of four similar Pacific Northwest Spaelotis species. It is a medium-sized moth (FW length 17 - 20 mm) with fairly long, even, dark gray-brown forewings. The costa is paler orange-brown in some specimens. The markings other than the orbicular and reniform spots are obscure, although the transverse lines are usually evident at least at the costa and occasionally elsewhere due to filling with gray. A thin black dash is present in some specimens. The forewing spots are partially outlined in black. The orbicular spot is oval, occasionally very long and fused to the reniform spot. The reniform spot is usually incomplete with parts of the medial portion and usually also the lateral aspect visible. These spots are filled with the ground color or gray. The hindwing is slightly shiny light gray with darker brown-gray veins, a faint discal spot, and light shading at the margin. The head and thorax are dark brown, like the forewing. The male antenna is filiform.

The female of Spaelotis clandestina has bowl-shaped pits on each side of the abdomen that are situated more laterally and further anteriorly compared to those of the other species.

Spaelotis clandestina is the most superficially distinctive of the North American Spaelotis species. Its forewing is darker brown, more smoothly patterned, and shinier than those of our other species. In addition, its hindwings of S. clandestina are lighter gray with contrasting darker veins compared to uniform dark gray for the other species. As in the other species, the shape and position of ventral pits of the posterior abdomen are diagnostic in females.

Larva is smooth, mottled gray with black and white dorsal-lateral chevrons.  It is illustrated by Lafontaine (1998).

This species is widely distributed in forests of eastern North America and throughout the Rocky Mountain region.  In the Pacific Northwest, it is moderately common in ponderosa pine forests and mixed hardwood-conifer forests at middle elevations. It also occurs in sage steppe in the Columbia Basin. It is less common than S. bicava at most locations in our area.

Spaelotis clandestina has a wide range in the Pacific Northwest, predominantly east of the Cascade Range crest in Washington and British Columbia. It is limited to the Blue Mountains in Oregon. Most British Columbia records are for the southern province, but a record from the Atlin area is from the far north.

Spaelotis clandestina has the largest range of any North American Spaelotis species. It extends from Alaska to the island of Newfoundland in the North, North Carolina in the Appalachian Mountains, Nebraska in the Great Plains, southern Arizona in the Rocky Mountains, and east-central California in the West.

This species is a climbing cutworm that is a generalist feeding on both hardwoods and herbaceous vegetation in such families as Ericaceae, Aceraceae, Pinaceae, Fabaceae, Brassicaceae, Poaceae, and Rosaceae.

The flight season of Spaelotis clandestina is relatively long, with records in our area from mid-May to mid-September. It has been most commonly collected in mid summer. It is nocturnal and comes to lights.

This species is sometimes a pest in fruit orchards, particularly in northeastern North America.