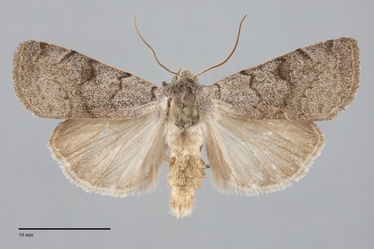 Richia parentalis is a variably patterned, medium-sized (FW length 16 - 19 mm) gray moth that barely enters the eastern portion of the Pacific Northwest in Montana. The forewing is brown to yellow-brown, tinted gray with a uniform dusting of darker scales that produces a dusty appearance. The median area is variably shaded, similar to the rest of the forewing (as shown), entirely dark gray, or dark only in the cell. In the latter two conditions the dark contrasts with the light filling of the orbicular and reniform spots. The lines are also variable, usually medium brown-gray, but with bold, black accents at the anterior antemedial and postmedial lines in some individuals. The antemedial and postmedial lines are bordered by light yellow-gray on the outside of the median area. The antemedial line is smoothly zig-zag, while the postmedial line is scalloped and gently curved toward the outer margin. A dark median line is present, darkest near the costal margin. The smooth subterminal line is pale like the pale portions of the other lines and is preceded by a thin darker shade. The terminal line is thin, evident between veins. The spots are large but variably evident, usually obsolete except when bordered by dark. The orbicular spot is weakly oval, open toward the costa, and the reniform spot is figure-eight shaped. The hindwing is light gray, darker toward the margin, with a slightly paler fringe. The head and thorax match the forewing ground color; a very weak transverse line is present on the collar. The head lacks a frontal tubercle. The male antenna is weakly biserrate.

This species can be identified by its dusty dull brown-gray color, darker lines, and absence of a dark collar. It is most similar in wing markings to Anicla exuberans, a species with a similar distribution in our area, but this species has a thick black collar that is lacking in R. parentalis. Dull-colored Euxoa species could be mistaken for this species, but have a raised tubercle on the frons that can be seen with magnification, and have kidney-shaped reniform spots rather than figure-eight shaped as in R. parentalis. Heavily marked specimens of R. parentalis with dark median area and black accents on the lines are unlikely to be confused with other species in our area.

Collectors in southern Idaho should be on the lookout for a similar species, Richia chortalis, which tends to be larger with lighter colored hindwings. Other differences between these species are described in Lafontaine (2004).

This species is widely distributed in ponderosa pine forests and quaking aspen forests throughout the Rocky Mountains at middle elevations, and in juniper-pinyon forests or woodlands of the Great Basin.  It barely enters the Pacific Northwest in western Montana.

Richia parentalis has only been found in western Montana in the Pacific Northwest.

This species is common in the Intermountain West where it occurs from east-central California and southern Arizona to north-central Colorado and northern Mexico near the border with eastern New Mexico. Further north it is found from central Nebraska and southwestern North Dakota to western Montana.

The adults are single brooded and fly from mid-July to early September.