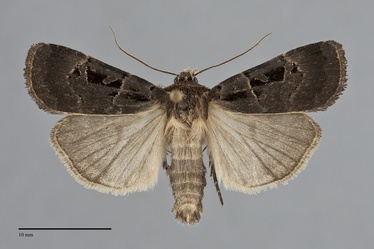 Pseudohermonassa tenuicula is a medium-sized (FW length 15 - 17 mm) moth with sooty blackish-brown forewing with black basal dash and filling of the cell and light hindwings. The antemedial and postmedial lines are dark with lighter yellow-brown filling. The antemedial line is oriented obliquely across the wing, closer to the base at the costa, while the postmedial line is broadly laterally convex. The subterminal line is variably, faint to a series of smudgy pale spots. The orbicular spots are similar in color to the antemedial and postmedial lines. The orbicular spot is oblique, ovoid to narrow, and open toward the costa. The reniform spot is hourglass to kidney shaped and is open at the costal and posterior ends. Both spots are most evident due to black filling in the adjacent cell that extends from the antemedial line to the lateral aspect of the reniform spot. The basal dash is interrupted by the antemedial line. The dorsal hindwing is pale yellow gray with slightly darker discal spot, veins, and terminal line. The head and body match the forewing ground color, and the collar is concolorous with the remainder of the thorax. The abdomen is lighter slightly reddish gray. The antennae of both sexes are filiform.

This species resembles Eueretagrotis perattentus and Agnorisma bugrai in general appearance, particularly the combination of brown forewing color with a black cell, but has darker forewing color and lacks the contrasting black collar found in both of these species. It also resembles Chersotis juncta but lacks the large light-colored claviform spot found in that species.

This species is widely distributed in eastern North America within moist forest habitats such as mixed hardwood-conifer forests or hardwood forests of birch and quaking aspen, extending westward to the Rocky Mountains.

The Pacific Northwest distribution of this species is limited to the Rocky Mountain Trench in eastern British Columbia.

The range of this species extends in a relatively narrow band across boreal North America from Newfoundland and West Virginia west to south-eastern British Columbia. Scattered records from Colorado and Montana are present in the Rocky Mountains.

This species appears to be a climbing cutworm that specializes on grasses (Poaceae) as larval foodplants.

Adults are single brooded and fly in summer.  Western Alberta records included in this study are from mid- and late July.