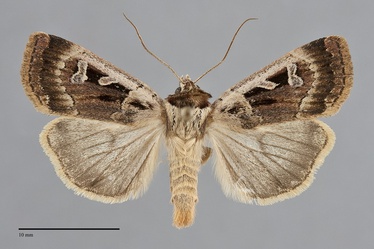 Pseudohermonassa flavotincta is an uncommon, reddish-brown to ochre-brown, medium-sized noctuid moth (FW length 15 - 16 mm) that is restricted to near the Pacific Coast. All color forms have black filling of the cell, a narrow oblique orbicular spot, and a long black claviform spot. The shape of the lines and spots resemble those of Pseudohermonassa tenuicula, which is found in the eastern part of British Columbia in our region. The forewing is usually red-brown, with pale ochre along the costa, at the wing base, and as filling of the lines and spots. The pale ochre form which is most common near the northern part of its range, has markings limited to the dark areas in the cell. The head and thoracic collar match the forewing ground color, with darker barring of the collar in red-brown individuals. The remainder of the thorax is ochre. The abdomen is yellowish gray. The male antennae are weakly biserrate.

This species is only likely to be confused with some forms of Parabagrotis sulinaris, a slightly larger variable species with which it occurs. This species has a broad V-shaped orbicular spot that is open toward the costa, not with parallel sides like that of P. flavotincta. In addition, its claviform spots is pale unlike the black spot of P. flavotincta.

This species is narrowly endemic to coastal rainforests in the Pacific Northwest west of the Cascades at low elevations.  It is usually rare and sporadic, but may be locally common in riparian zones along creeks, rivers, and around the edges of coastal marshes.  This species is considered to be management sensitive, depending on disturbed openings and meadows along riparian zones in the forest.

Pseudohermonassa flavotincta is endemic to the north Pacific Coast of North America where it occurs between the Alaska Panhandle and central Oregon.

This species does not occur outside of our region.

This species is a climbing cutworm that appears to favor tall, coarse grasses (Poaceae) growing in marshes and riparian wetlands as larval foodplants.

Pseudohermonassa flavotincta is single brooded with a flight in mid to late summer. Adults have been collected from early July through August. It is nocturnal and comes to lights.