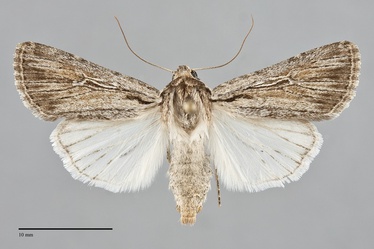 Protogygia postera flies the latest in the season of four streaky gray to brown Protogygia species with fused forewing orbicular and reniform spots. They are difficult to identify by appearance but can usually be sorted by combination of subtle features of the maculation, size, and flight period. Protogygia postera is relatively small (FW length 15 - 17 mm) and has a light gray brown dorsal forewing that is darkest in the margin and lacks dark transverse lines. It has a streaky look due to dark veins and lighter color near the veins. A few specimens have dark wedges between the veins near the margin, but these and a terminal line are usually lacking. A thin, black, basal dash is present. The light orbicular and reniform spots are filled with the ground color and surrounded by dark, especially toward the trailing margin. The orbilar spot is very long and weakly diamond-shaped, and the reniform spot is thin and arrowhead-shaped. The hindwings are nearly white in both sexes. The top of the head is gray-brown. The base of the thorax is light silver gray, separated from the gray-brown margin by a thin black transverse line. The rest of the thorax is gray-brown with gray margins to the tegulae. The male antenna is filiform with weak fasciculations.

This species has the latest flight period of these species and can usually be identified by phenology alone. It is most similar to Protogygia lagena, but has finer markings and lacks dark wedges and a terminal line, unlike most specimens of this species. Females of P. lagena have darker hindwings than those of P. postera. Protogygia enalaga usually flies earlier than P. postera. It has lighter gray forewings, especially the costa, appears streakier, and has a terminal line comprised of a series of dark dots. This species could potentially be confused with Euxoa species with fused forewing spots, especially Euxoa atristrigata which flies in late summer in dry environments. This species has black spots, not light as in P. postera. It is also generally similar to Rhizagrotis cloanthoides, but this species has an irregular series of black marks on the distal forewing that P. postera lacks.

Protogygia postera is found in the dry interior steppes of Washington and Oregon. It has been found as far north as Grant County, Washington. Most of our records are from southeastern Oregon.

This species reaches its northwestern limit in the Pacific Northwest. It is found further south in the Intermountain region from eastern California to south-western Wyoming and northern New Mexico. Further north it has been collected on the plains of southern Alberta and Saskatchewan.

This species flies during July and August, occasionally as late as September, later in the summer than the other similar Protogygia species in our region.