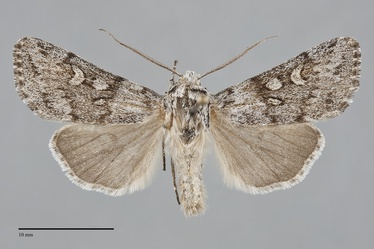 Protogygia milleri is a distinctive, powdery gray, medium-sized (FW length 15–18 mm) moth found at mid to high elevations in central and south-western Oregon. Its forewings have black lines and spots. The median area is slightly darker than the rest of the forewing. The transverse lines and spots are black and somewhat indistinct. The antemedial line is slightly uneven and is oriented nearly perpendicular to the forewing axis. The post medial line is scalloped and smoothly excurved. The subterminal line is black and jagged. The three spots are black and are filled with lighter gray. The orbicular spot is oval and the reniform spot is moderately indented laterally. The fringe is checkered with dark gray. The hindwing is gray, darkest at the base of the fringe. The fringe itself is nearly white. The head and thorax are powdery gray, with black on the collar and edges of the tegulae. The abdomen is similar gray to the hindwing. The male antenna is bipectinate.

Pacific Northwest populations of this species differ from those further south in being gray and black without warmer colors. Those from California have pink suffusion distal to the cell and in the basal and mid-fold on the forewing.

This species can be told from other gray species with similar features by the powdery appearance, indistinct black lines, and elongate forewing shape.

Larva is smooth, pale gray-white with thin white dorsal and subdorsal lines.  It is illustrated by Lafontaine and Fauske (2004).

Protogygia milleri is found along the east slope of the Cascade Mountains and in the adjacent Ochoco and Klamath Mountains in central and southern Oregon. The most northerly record is from Santiam Pass in Jefferson County, Oregon.

The range of this species extends south along the Sierra Nevada to southern California. It is also found in the Transverse Ranges north of the Los Angeles Basin.

No information is presently available regarding larval foodplants of this species, but it may be a burrowing cutworm the burrows through loose soils of volcanic ash and feeds on herbaceous vegetation.

Adults are single brooded and are on the wing from late May until early August in our region. They are nocturnal and come to lights.