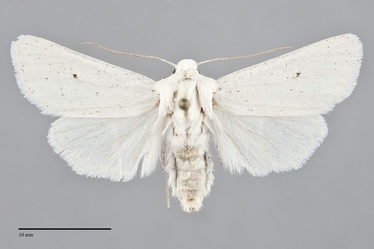 Protogygia album is a nearly entirely white moth found in dry steppe habitats. It is medium-sized (FW length 14–17 mm). The forewing is sprinkled with scattered black scales, and the only consistent marking is a small, black dot at the position of the lower reniform spot. The male antenna is bead-like.

This species is distinctly unlike most of our other Protogygia species, which are brown and gray with a streaky pattern and fused forewing spots. It is only likely to be confused with the nominate subspecies of Copablepharon spiritum, which is mostly white. This species lacks the black dot at the end of the cell. These species also differ structurally.

The type locality of Arsilonche album Harvey is Oregon.

This species is found mostly in the Mojave and Sonoran deserts of the Southwest.  The Pacific Northwest population is on dry sagebrush steppe at low elevations.  This species is usually uncommon or rare in our region.

Protogygia album is found in the Columbia Basin of Washington and northern Oregon in our region.  It has not been found in similar habitats in southern Oregon but has been collected once in the Snake River Plain of southern Idaho Idaho.

The range of this species extends south through California to northern Mexico. There are a few records from southern Nevada, southern Utah, and Arizona.

This species has been observed feeding on blazing-star (Mentzelia laevicaulis) in the Loasaceae.

Adults have a long flight season in the Pacific Northwest, with records from mid June through September. It is nocturnal and comes to lights.