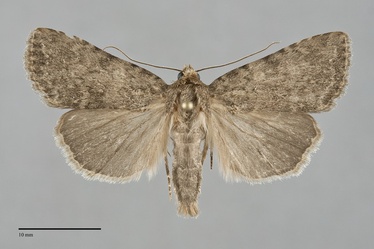 Pronoctua pyrophiloides is superficially indistinguishable from Pronoctua peabodyae, an uncommon but more widely distributed species in the Pacific Northwest. It is a medium-sized species (FW length 16 - 19 mm) with dull olive-gray to gray-brown forewings with a darker terminal area. The double lines are filled with slightly lighter gray-tan, but the pattern is usually muted and indistinct. As in P. peabodyae, the hindwing is dark gray with a lighter fringe. The head and thorax match the forewing. The male antenna is bead-like.

Definitive identification of this moth requires genitalia dissection. Males differ in the shape of the male vesica, as shown in Lafontaine (1998). The sclerotized plate in the vesica is positioned on the dorsal surface, 90° from the only subbasal diverticulum; in P. peabodyae this plate is on the right opposite the diverticulum. Females are structurally identical and cannot be distinguished from each other by maculation or genitalia structure.

This species appears to favor dry open ponderosa pine forests, but is very rare and sporadic.

Pronoctua pyrophiloides has been collected in southeastern Oregon in the Pacific Northwest.

The range of this species is California, barely extending to southern Oregon.

This species is single brooded with adults on the wing in late summer and early fall. It has been collected in August and September in our region. It is nocturnal and comes to lights.