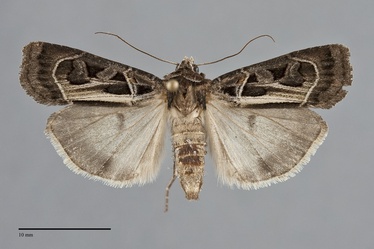 Prognorisma substrigata is a distinctively patterned black and pale ochre moth with the pattern dominated by pale smooth transverse lines, geometric black marks, and a pale, horizontal streak across the lower median area. It is found in central British Columbia in our region. The moth is medium-sized (FW length 15 - 17 mm) with narrow squared-off forewings and broad hindwings. The forewing ground color is dark brown-gray with light yellow-brown in the middle of the wing and toward the posterior margin which forms a horizontal streak just anterior to the trailing margin. Thick, jet-black marks are formed by the basal dash and large claviform spot, the cell between the antemedial line and the orbicular spot and the orbicular and reniform spots, and inferior to the reniform spot below the cubital vein. A series of black wedges are also present medial to the pale brown subterminal line. The antemedial and postmedial line are very smooth. Both are double and black, but are evident mostly due to the pale yellowish filling. The hindwing is light gray basally and medium gray near the margin with a relatively large gray discal spot.

This species is unmistakable due to the pattern of black marks and smooth yellow transverse lines. Feltia jaculifera has the most similar pattern, but it is light gray, lacks the pale yellow lines, and has a paler hindwing in all but the darkest females.

This species is narrowly endemic to dry short-grass prairie on the northern Great Plains and dry open forests in the northern Rocky Mountain region.

The distribution of this species includes two sites in the interior of British Columbia (Lafontaine 1998).

Prognorisma substrigata has a relatively small range in western Canada and the Rocky Mountains. Most records are from southern Alberta and adjacent Saskatchewan and British Columbia, with a single disjunct locality in southern Northwest Territory. The species also occurs in central Colorado and northern New Mexico.

This species flies in summer from mid-June to early August. It is nocturnal and is attracted to light.