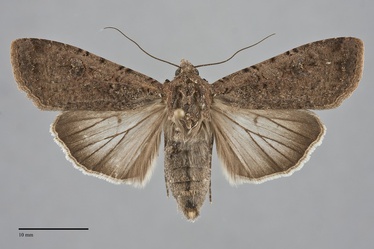 Peridroma saucia is a fairly large moth (FW length 20–24 mm) with a world-wide distribution. It is dull, medium brown in color, often with a red or ochre tint, and is mottled with darker wood-brown and a few light scales. The most common form has nearly uniform brown forewings, but the costa is often darker or lighter than the rest of the wing and the terminal area is commonly darker gray brown. The pattern is usually indistinct but with a complete compliment of lines and spots. The double transverse lines are most evident as dark spots on the costa and are indistinct elsewhere. The light subterminal line is also indistinct, but it is usually preceded by a darker shade that forms a dark triangular shade at the costa. The orbicular and reniform spots are dark but thin with slightly gray filling; the reniform spot is rimmed or partially filled with lighter yellow scales in some individuals. The orbicular spot is variable in size and shape. It is usually oval, but occasionally irregular in shape. The reniform spot is large and shaped like a sideways heart. It is variably filled with gray. The claviform spot is also variable in size and strength. The hindwing is pearly gray with dark gray-brown veins, thin discal spot, and a dark marginal shade. The fringe is two-toned, gray at the base and white distally. The head and thorax match the forewing ground color and are slightly mottled, although the collar and tegulae are darker than the central thorax in specimens with extensive dark shading on the forewings. The collar has a thin dark transverse bar across the upper third in some specimens. The male antenna is filiform.

This species can usually be identified without difficulty despite its drab brown color. It is our only large noctuid species with a mottled dull brown forewing with faint lines and spots and pearly gray hindwing.

Larva is smooth, mottled yellow-gray to red-brown.  It is illustrated by Lafontaine (2004).

This species is highly vagile and migratory, and is widely distributed throughout the world in disturbed and agricultural habitats.  In the Pacific Northwest, it is probably not a permanent resident over the winter, but migrates northward in the spring to colonize disturbed agricultural and urban habitats where epidemic outbreaks may occur.  However, it is usually rare or absent in more natural habitats of the Pacific Northwest.

This species is widely distributed in the Old World and New World. In North America it has been found across the entire continent to southern Canada, with strays recorded further north.

This species is a generalist that feeds on most kinds of herbaceous vegetation such as the families Brassicaceae, Fabaceae, and Chenopodiaceae.  During epidemic outbreaks, it may also feed on grasses or hardwood trees and shrubs.

Adults are migratory and fly great distances. They have been collected throughout most of the year in the Pacific Northwest, but are most common in late summer and fall.  The phenogram is bimodal with broad peaks in early and late summer suggesting the presence of two broods in our area.  Peridroma saucia is nocturnal and comes readily to lights.

This species is a major agricultural pest throughout the world, particularly in herbaceous crops.  In the Pacific Northwest, it is a major pest in peppermint and alfalfa crops.  During epidemic outbreaks, it may also cause serious damage to grass crops and fruit trees.