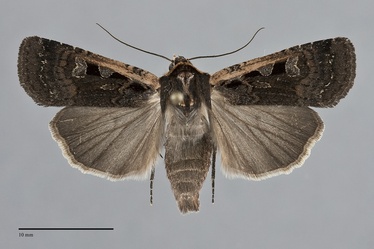 Parabagrotis exsertistigma is the least variable species in the genus Parabagrotis. It is a dark brown, medium-sized (FW length 14 - 18 mm) noctuid moth with a light ochre to gray-brown costa, a U-shaped orbicular spot that opens toward the costa, and a light ochre to gray-brown collar with a black bar across the top. The forewing is dark red-brown to blackish brown with slight gray suffusion medial and lateral to the median area. The costa is ochre yellow, orange-brown, or rarely brown-gray from the base to the postmedial line, interrupted by gray bars at the origins of the transverse lines. The cell is pure black from the antemedial line to the reniform spot. A black basal dash is present. The transverse lines are double, gray except for a portion of the antemedial line which is black, filled with light gray-brown to light red-brown. The basal line is only evident at the costa, while the antemedial line is wavy and strongly obliqued toward the anal angle from the cell to the trailing margin. The postmedial line is very weakly scalloped and relatively straight across the wing, weakly convex toward the outer margin around the reniform spot. The subterminal line is a series of small yellow dots, occasionally absent, and preceded by a dark shade near the apex. The three spots are similar, black with a pale ochre inner component. The orbicular spot is U-shaped and is open to the costa and filled with gray. The reniform spot is usually incomplete at the anterior and posterior ends and is also filled with gray. The claviform spot is variable, sometimes complete but often faint or visible only as the anterior portion. The hindwing is dark gray, slightly darker toward the margin, with darker discal spot and veins. The fringe is two-toned with a dark gray base and light gray distally. The head and base of the collar are brown. The middle of the collar is traversed by a lighter strip followed by a moderately thick bar across the top. The rest of the thorax is dark brown. The male antenna is filiform.

This species can usually be identified by the combination of dark brown ground color, yellow to orange costa, black cell, and broad U-shaped orbicular spot. It is most likely to be confused with dark specimens of Parabagrotis formalis, a common and variable species with which it flies. Most dark specimens of P. formalis lack this precise combination of characters, often lacking black in the cell or having a gray rather than a yellow costa. The few specimens that have both black in the cell and a yellow or orange costa can usually be correctly identified by the combination of a thicker black band on the collar, a very shallow open orbicular spot (the limbs of the "U" form an angle slightly less than 90 degrees in P. exsertistigma and form and obtuse angle in P. formalis), and lighter brown color that is similar inside and outside the median area unlike those of P. exsertistigma. Brown species of Euxoa with a lighter costa (like Euxoa castanea and Euxoa idahoensis) have a round orbicular spot that is closed toward the costa.

This species is widely distributed in dry forests and rangelands throughout much of western North America.  In the Pacific Northwest, it is common to abundant in mixed hardwood-conifer forests and ponderosa pine forests in the Cascades and Rocky Mountain regions at middle elevations, and on dry, open sagebrush steppe and in juniper woodlands at lower elevations east of the Cascades.  Epidemic outbreaks frequently occur on particularly disturbed rangelands over-grazed by domestic livestock.  West of the Cascades, it is usually uncommon or rare, but does occur in disturbed urban and agricultural areas, grasslands, oak savanna, oak woodlands, and mixed hardwood forests at low elevations.

This species is widely distributed throughout the entire Pacific Northwest as far north as southern British Columbia.

Parabagrotis exertistigma is widely distributed throughout much of the western United States, extending east to the Black Hills in South Dakota, the southern Rocky Mountains of Colorado, and south to northern Arizona and central California.

This species is a climbing cutworm that feeds on grasses (Poaceae) and general herbaceous vegetation.

This species may be a minor pest at times in pastures and in herbaceous or grass seed crops.