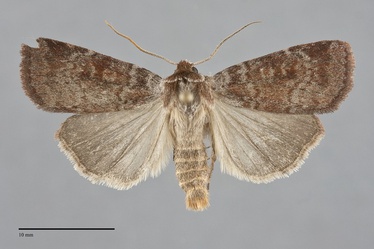 Lycophotia phyllophora is an uncommonly collected, medium-sized moth (FW length 16- 18 mm) with brick-red lines and spots on a blue-gray background with extensive red-brown suffusion. It has only been found in the Peace River region of British Columbia in our region. The forewing lines and spots are red-brown and somewhat ill-defined, especially the outlines of the orbicular and reniform spots. The lines are double and filled with gray. The antemedial line is slightly uneven. The medial component of the postmedial line is scalloped, and the tips of the scalloping are accentuated as a series of dark lines on the vein lateral to the line itself. The median line is red-brown and is prominently darker in the cell. The subterminal line is irregular with a dark red-brown shade medial to it. The orbicular spot is round. It and the reniform spot are gray without a black outline and are filled with red-brown. The hindwing is gray with a lighter slightly reddish fringe. The head and thorax are red-brown. The male antenna is biserrate.

Abagrotis placida has red-brown and gray forms, but rarely has individuals with a mixture of these colors on the forewings. The markings are similar to those of L. phyllophora but are more crisply outlined with dark. The postmedial line of A. placida is smooth without scalloping, and the veins lateral to this line lack the horizontal dots that are present in L. phyllophora. Several species of Diarsia are also similar to L. phyllophora, especially Diarsia dislocata which is red-brown and gray. The forewing spots of these Diarsia species are at least partially lined by black unlike the indistinct spots of L. phyllophora.

Larva is smooth, mottled yellow-brown to red-brown with a pale yellow mid-dorsal line.  It is illustrated by Lafontaine (1998).

This species is widely distributed in moist hardwood forests throughout much of eastern North America.

Lycophotia phyllophora has only been found in the Peace River Region of north-eastern British Columbia in our area.

This species occurs in eastern North America where it is found from the northern island of Newfoundland and north-western Ontario south to North Carolina in the Appalachian Mountains. The British Columbia record is significantly west of the range shown in Lafontaine (1998).

This species is single brooded. The British Columbia record is from mid-July. Lycophotia phyllophora is nocturnal and is attracted to lights.