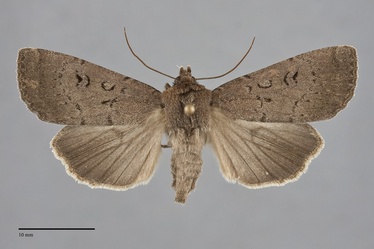 Graphiphora augur is a dull, medium to dark gray-brown, medium-sized to large moth (FW length 19 - 22 mm) that flies in wet habitats during the summer. Its forewings have black spots and a postmedial line. The forewings are relatively broad and are smoothly colored, slightly darker near the outer margin, occasionally with a slight reddish tint. The basal and antemedial lines are absent or very faint gray. The postmedial line is dark gray, double with a strong dentate inner portion and a faint even outer part, and is filled with the ground color. The pale subterminal line is very faint or absent. The terminal line is absent or a faint series of spots between the veins. The orbicular spot is oval, and usually open toward the costa. The reniform spot is deeply indented laterally, thin except for the lateral indented portion which is the darkest forewing mark. The claviform spot is absent or very faint. The hindwing is medium gray-brown, slightly darker gray toward the margin, with faint darker gray discal spot and veins. The head and thorax match the forewing. The male antenna is weakly bead-like.

This species can usually be identified by its dull even dark brown color and limited black markings. Spaelotis clandestina has a dark brown forewing with black spots, but its forewing is much longer and thinner than that of G. augur and its hindwing is lighter gray. Xestia atrata, a rarely collected species that occurs in eastern British Columbia in our region, is powdery dark brown but lacks black spots. Amphipyra tragopoginis is smooth dark brown and flies with G. augur, but has a sheen on the forewings and hindwings and its forewing spots are represented by black dots rather than as black outlines.

The larva is smooth, pale gray with faint dorsal-lateral chevrons and a thin black lateral line.  It is illustrated by Lafontaine (1998).

Graphiphora augur is widespread in forest and moist open habitats throughout most of the Pacific Northwest. It is rare in the dry interiors of Washington, Oregon, and Idaho.

This species has a Holarctic distribution. In North America it occurs across boreal and subarctic zones from Alaska to the island of Newfoundland. The range extends to Ohio in the East, South Dakota in the Great Plains, Arizona in the Rocky Mountains, and the San Francisco Bay area along the Pacific Coast.

This species is a generalist feeding on many kinds of hardwoods including currants (Ribes spp.) in the Grossulariaceae, cherries (Prunus spp.), hawthorns (Crataegus spp.), Rubus spp., ocean-spray (Holodiscus spp.), and Indian-plum (Osmaronia cerasiformis) in the Rosaceae, birches (Betula spp.) in the Betulaceae, and willows (Salix spp.) in the Salicaceae.  It may have a preference for the Rosaceae.

Adults are on the wing during the summer, with most records from mid-June through August in our region. It is nocturnal and comes to lights.