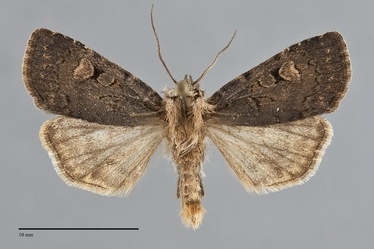 Feltia nigrita is a small to medium-sized (FW length 13 - 17 mm), dark gray-brown moth that is restrited to northern British Columbia in the Pacific Northwest. Its forewing has light ochre filling of the reniform spot and black in the cell between the spots. The black transverse lines are relatively inconspicuous against the dark ground color, as is the thin claviform spot. The postmedial line is scalloped and broadly convex toward the outer margin. The orbicular and reniform spots are large, with black outer and light ochre inner components. The reniform spot is the most prominent forewing marking due to its light filling. The hindwing is light yellowish gray with faint gray discal spot, postmedial line, submarginal band, and terminal line. The head and base of the collar are wood brown. The tip of the collar is light yellow brown, separated from the base by a black transverse line. The remainder of the thorax is yellow-brown. The male antenna is bead-like.

Feltia nigrita can be identified from other species in its northern distribution by the combination of dark gray-brown forewing and light-filled reniform spot. Xestia ursae and Xestia atrata occur in the north and also have dark brown forewings, but both species lack the light reniform spot of F. nigrita.

The larva is smooth, pale brown dorsally and dark brown laterally with fine dark brown mottling.  It is illustrated by Lafontaine (2004).

This species is widely distributed in boreal spruce-fir or pine forests in northern North America and Eurasia. It has also been collected over dry tundra in northern Alaska.

This species is found in subarctic and montane north-western North America from northern Manitoba and the Alberta Rocky Mountains to the Brooks Range in northern Alaska.

Feltia nigrita is single-brooded and flies during summer. The only British Columbia records are from July.