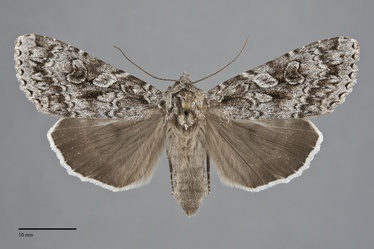 Eurois occulta is one of our largest cutworm moths (FW length 24 - 31 mm). The ground color is mottled gray without warm tints, darkest gray in the cell, in the median area near the claviform spot, and distal to the postmedial line. A short black basal dash is present, and a black line connects the orbicular and reniform spots in the lower cell. The transverse lines are black, double, with slightly paler gray filling than the ground color. The basal and antemedial lines are irregular. The postmedial line is scalloped to dentate with dark and light dots on the tips of the teeth. The subterminal line is pale and faint but is preceded by a strong series of black chevrons. The terminal line is a series of small black triangles between the veins. The spots are fairly large, black with pale gray filling and central darker scales. The orbicular spot is ovoid to diamond-shaped and is filled with paler gray scales than the reniform spot. The inner reniform spot is dusted with black. The hindwing is nearly uniform dark smoky gray with a pure white fringe. The head and thorax are hoary gray with darker black lines. The male antenna is weakly beaded.

This species can be identified by its large size, mottled gray forewing, and dark gray hindwing with a white fringe. The most similar species are members of the genus Polia. None of these species have a dark hindwing with a white fringe. They have fine hairs on the surface of the eyes, like all other members of the tribe Hadenini, while those of Eurois are bare.

Larva is smooth, mottled gray with black dorsal-lateral chevrons and a thin white lateral line.  It is illustrated by Lafontaine (1998).

This species is widely distributed across both Eurasia and North America in boreal spruce-fir forests and in forests of birch and quaking aspen, extending south through the higher mountains of western North America.  In the Pacific Northwest, it is usually rather rare and sporadic in spruce-fir forests along the summit of the Cascades at high elevations, although it may be locally frequent in mixed hardwood-conifer forests or ponderosa pine forests at middle elevations east of the Cascades.

Eurois occulta is widely distributed in forests throughout most of the Pacific Northwest. It is not found in the dry interior steppe regions.

Eurois occulta is widespread in the Northern Hemisphere and occurs on Greenland and throughout a large portion of Eurasia. On the North American Continent, it is found throughout the boreal and subarctic zones from Alaska to Labrador. The range extends south to Maryland in the East, southern Wisconsin in the Midwest, eastern Arizona in the Rocky Mountains, and southern Oregon on the West Coast.

This species is a generalist feeding on many kinds of hardwoods including huckleberries (Vaccinium spp.) in the Ericaceae, snowberry (Symphoricarpos spp.) in the Caprifoliaceae, sweetgale (Myrica spp.) in the Myricaceae, birch (Betula spp.) in the Betulaceae, willows (Salix spp.) in the Salicaceae, and cherries (Prunus spp.) and spiraea (Spiraea spp.) in the Rosaceae.