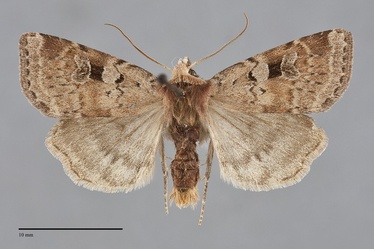 Diarsia calgary occurs in the Rocky Mountains and south-central and northern British Columbia and closely resembles Diarsia esurialis, which is common in the western part of the Pacific Northwest. It is a small to medium-sized species (FW length 14 mm) with light yellow-brown forewings that are covered with gray scales producing a hoary light gray-brown appearance (Lafontaine 1998). The basal and antemedial lines are black, double at the costa. The antemedial line is zig-zagged across the forewing. The postemedial line is double with a dentate medial component, faint smooth lateral component, and paler filling. The tips of the "teeth" of the line are evident as a series of thin black lines on the lines lateral to the rest of the line. The subterminal line is pale and smooth, preceded by a tan shade at the costa. The terminal line is a series of lines between the veins. The fringe is light brown. The hindwing is pale yellow-gray with light gray markings comprised of a diffuse discal spot and wavy postmedial and submarginal bands. The head and collar are light tan, while the rest of the thorax is darker red-brown. The male antenna is bead-like with slightly constricted individual segments.

This species and D. esurialis are closely similar. Most specimens can easily be assigned to one or the other species by locality, since D. calgary occurs in the Rocky Mountains and D. esurialis is found near the Pacific Coast. However, an area of overlap between them is found in central British Columbia where D. calgary has been found in the Fraser River Canyon between Lytton and Lillooet. Differences between these species are given by Lafontaine (1998). The ground color of D. calgary is gray-brown with a dusting of gray scales; that of E. esurialis is warmer orange-brown without gray scales. The male antennae are slightly different. That of D. calgary is beadlike, while that of D. esurialis is weakly biserrate. The two species also differ structurally in the male and female genitalia.

This is a relatively rare species of the Rocky Mountains that appears to occur in moist conifer or quaking aspen forests.  It is very rare in the Pacific Northwest, where records are limited to British Columbia.

Diarsia calgary is known from two sites in British Columbia: the Fraser Canyon between Lytton and Lillooet, and the extreme Northwest near the Yukon border. It is probably more widely distributed in the eastern and northern portions of the Province and might also occur in eastern Idaho.

This species is predominantly distributed in the Rocky Mountain region. Most records are from western Alberta, with scattered records in Montana, Wyoming, Colorado, and Utah. Isolated records in western Saskatchewan and eastern California are shown in Lafontaine (1998).

No information is presently available regarding larval foodplants of this species, but it probably feeds on a mixture of hardwoods and herbs based on related species.

This species is single brooded with adults flying in June and July across the entire range of the species (Lafontaine 1998). They are nocturnal and come to lights.