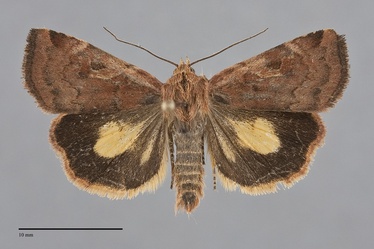 Cryptocala acadiensis is a small to medium-sized (FW length 13 -  15 mm), distinctively colored moth with reddish-brown forewings and orange-yellow hindwings broadly bordered with black. The forewings are relatively short and broad. The forewing ground color is usually reddish brown, occasionally tan, with dark gray transverse lines and shading along the costa.  The antemedial and postmedial line are darker than the basal line. The subterminal line is preceded by a dark shade, which is most evident at the costa, where it forms a dark, wedge-shaped mark. The pale orbicular and reniform spots are usually fused, but remain separate in a few individuals. The black hindwing marginal band is broad and the black margin is usually present along the costa and medial margin as well. The head and thorax are colored like the forewings, with the abdomen gray with redder scales toward the posterior end. The male antenna is beadlike, and that of the female is filiform.

This species is only likely to be confused with our two Noctua species because of their orange and black hindwings, although it is much smaller than both of them. In addition, N. comes and N. pronuba  lack fused forewing spots and have more extensive bright orange color on the dorsal hindwing.

This species is widely distributed across Canada extending westward to the northern Rocky Mountain region in moist spruce-fir forests, or in hardwood forests of birch and quaking aspen.

The Pacific Northwest range of this species is limited to southeastern British Columbia and the Blue Mountains of southeastern Washington.

Cryptocala acadiensis is found across boreal North America, predominantly across southern Canada. The range extends as far south as Connecticut and Ohio in the East and Montana and Washington in the West.

This species is a generalist feeding on both hardwoods and various herbaceous plants in such families as Rosaceae, Caprifoliaceae, Asteraceae, and Hypericaceae.

Adults are single brooded and have been found in July in our region. They are nocturnal and come to lights.