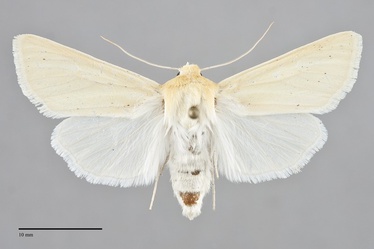 Copablepharon spiritum is a pale white to light yellow Copablepharon that flies in late summer and fall in the dry interior of Washington and Oregon. It is a relatively large and stout Copablepharon species (FW length 18 - 21 mm). The entire moth in the nominate subspecies found in the Columbia Basin is creamy white. The forewing is marked by a series of dots along the antemedial and postmedial line in most individuals, and there are a few scattered black scales over the entire wing. Dark individuals have pale gray shading over the central hindwing and black dots on the veins as the hindwing median band. The forewing of subspecies C. s. lutescens from Oregon is usually pale yellow, although a few white individuals occur, with similar markings and variation in dark markings as in C. s. spiritum. The forewing fringe is two-toned in yellow individuals with the inner portion the same color as the rest of the forewing and the outer portion white. The male antenna is weakly biserrate.

The nominate subspecies can be told from Protogygia album, another nearly entirely white moth, by the lack of a black dot at the position of the reniform spot. Subspecies C. s. lutescens is similar to Copablepharon grandis which usually flies earlier in the summer and is found in southern Oregon and Idaho. It lacks the scattered black scales and two-toned forewing fringe found in C. spiritum and the male has a beaded antenna.

The Pacific Northwest populations of this species are divided into two subspecies as described above. The type locality of the nominate subspecies from the Columbia Basin is Hanford Reservation, Benton County, Washington. Copablepharon s. lutescens is described from Alkali Lake, Lake County, Oregon. A third subspecies with darker hindwings, C. s. bicolor, occurs in southern California.

The larva is unknown.

This species is widely distributed throughout much of western North America at low elevations in sand dunes or in dry habitats with loose, sandy soils.  It also occurs across central Oregon in dry, open sagebrush steppe and in juniper woodlands with loose soils composed of volcanic ash.  It is usually uncommon or rare, but may be locally common in some sand dunes.

The nominate subspecies is found in the Columbia Basin of Washington and northern Oregon. It has not been found in Canada. Subspecies C. s. lutescens occurs in central and south-eastern Oregon.

This species occurs in Southwestern North America outside of the Pacific Northwest. The range extends from southern Wyoming and northwestern New Mexico in the east to eastern and southern California and adjacent northern Mexico in the west.

No information is presently available regarding larval foodplants of this species, but it is probably a burrowing cutworm that burrows through loose sand or volcanic ash soils and feeds on herbaceous vegetation based upon related species.

The adults are single-brooded and fly in late summer and fall. Pacific Northwest records extend from late July through September. It is nocturnal and comes to light.