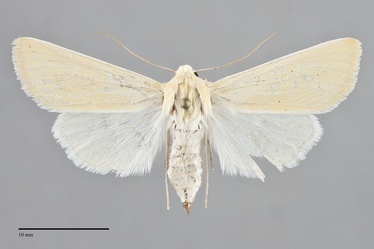 Copablepharon grandis is a medium-sized moth (FW length 17 - 19 mm) with pale yellow forewings and white hindwings. The forewing postmedial line is marked by black dots on the veins in some specimens. The costa and fringe are identical to the ground color. The hindwing median line is also evident as black dots in some individuals, but there is no gray shading. The head and thorax are yellow, like the forewings, while the abdomen is light yellow-gray. The male antenna is bead-like.

This species is most likely to be confused with several other Copablepharon species. It differs from pale specimens of C. absidum by the lack of longitudinal darker and lighter areas on the forewing. Pale specimens of C. canarianum are quite similar, but have a white forewing costa and bicolored fringe, both of which are pale yellow in C. grandis. Females of these species can be sorted by viewing the tips of the ovipositors under magnification because those of C. canarianum are laterally compressed ("knife-like") while those of C. grandis are conical, like those of most noctuids. Copablepharon spiritum lutescens has similar light yellow and white color but is larger, has scattered black scales on the forewing, a bicolored fringe with pale outer edge, and its male antenna is biserrate rather than bead-like. It also flies slightly later in the season than C. grandis.

This species is widely distributed throughout much of western North America in dry prairie and desert habitats with loose, sandy soils.  It is particularly common on the short-grass prairies of the Great Plains.  However, it is rare and sporadic in the Pacific Northwest, being narrowly restricted to dry lake and river sediments at low elevations in southeastern Oregon.

Copablepharon grandis is found in the drier parts of south-eastern Oregon and southern Idaho in the Pacific Northwest.

This species has one of the widest distributions of any Copablepharon species. It is most commonly collected in the Southwest where it occurs from south-western California to the Texas Panhandle north to our region and central Wyoming. It is also found in the Great Plains region north to Alberta, Saskatchewan, and Manitoba.

This species is probably a burrowing cutworm that feeds on various herbaceous vegetation.

Adults are single brooded and fly in summer. The few Pacific Northwest records are from July. It is nocturnal and comes to lights.