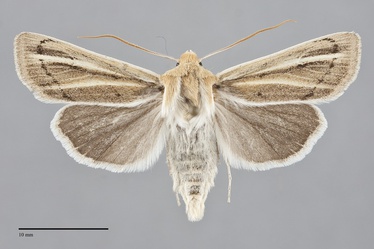 Copablepharon atrinotum is a medium-sized, yellow moth (FW length 17–20 mm) that is similar to its closest relative, Copablepharon absidum, but more heavily marked with gray suffusion, dark scaling along the veins, and black along the antemedial and postmedial lines. These dark markings are most evident in specimens from the early part of the season. The hindwing is light to dark gray with a white fringe, also darkest in early-season individuals. The male antenna is bead-like. The valve of the male genitalia lacks a flange along the posterior margin that is found in C. absidum.

This species, especially pale late-season specimens, is only likely to be confused with C. absidum in southern Oregon. Copablepharon absidum is less heavily marked with dark, as described above, and differs in the shape of the male genitalia. In practice the species can be differentiated by distribution since C. atrinotum is found in the central part of the state (Alkali Lake, Lake County) and C. absidum occurs in the south-east as far west as the Catlow Valley near Steens Mountain, Harney County. Dark individuals of this species are similar to Copablepharon fuscum, an ocean beach species from northwestern Washington and adjacent British Columbia.

This species is narrowly endemic to sand dunes at low elevations in the Great Basin region.  It may be locally common in this very restricted habitat.

Copablepharon atrinotum is only known from dunes in the south-central part of Oregon in our region.

The limited range of this species extends south through northern Nevada to the vicinity of Mono Lake, Mono County, California.

No information is presently available regarding larval foodplants of this species, but it is probably a burrowing cutworm that burrows through sand and feeds on herbaceous vegetation.

The adults have been collected in June and July. It is nocturnal and comes to lights.