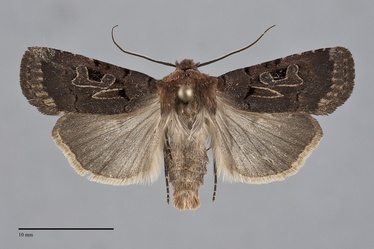 Chersotis juncta is a medium-sized noctuid moth (FW length 13 - 16 mm) with smooth, dark brown forewings with pale spots, including the claviform spot, and black markings along some of the lines and in the cell between the orbicular and reniform spots. The moth resembles many species of Euxoa and Parabagrotis in shape and color. The forewings are smooth, dark brown, often with a slight purple or reddish tint. The transverse lines are faint except for black dots where the basal, antemedial, and postmedial lines meet the costa and the subterminal line which is evident as a series of ill-defined pale spots in most individuals. The spots are more prominent pale yellow-brown and are filled with the ground color. The posterior orbicular and reniform spots are fused across the lower cell, and the cell anterior to the fused spots is filled with black to form a quadrate spot. The claviform spot is large and elongate and its base at the antemedial line is another black spot. The hindwings are dull dark gray with faintly darker margin and discal spot. The head and thorax are brown like the forewings and the abdomen is dark gray. The male antenna is weakly beadlike.

Chersotis juncta can be identified by the combination of dark brown forewing color and characteristic contrasting yellow spots: fused orbicular and reniform spots with a black spot between them and a large claviform spot.

This species is widely distributed across Canada and throughout the mountains of western North America in boreal spruce-fir forests, or in hardwood forests of birch and quaking aspen.  In the Pacific Northwest, it is usually uncommon and sporadic, but may be locally common in spruce-fir forests at high elevations and ponderosa pine forests at middle elevations in both the Cascades and Rocky Mountain regions.  It also occurs in quaking aspen forests at high elevations in the Steens Mountains of southeastern Oregon.

Chersotis juncta is fairly widely distributed in the Pacific Northwest. It is most common in dry forest habitats east of the Cascade crest, especially on high ridges. Most records are from Washington and Oregon, with scattered locations in British Columbia as far north as southern Yukon Territory.

This species occurs in North America where it is found across the northern Continent from southern Greenland and Labrador to Yukon Territory. It ranges south to Nova Scotia in the east. The range extends further south in the mountains of the West, reaching Colorado and Utah in the Rocky Mountains and the northern Sierra Nevada in California.

Adults are single brooded and fly in mid summer. Pacific Northwest records are from late June to early August. It is nocturnal and comes to light.