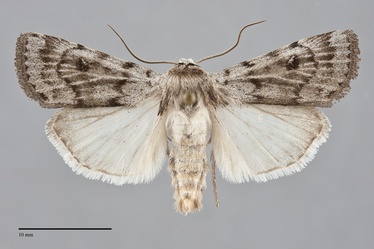 Anicla tepperi is a medium-sized (FW length 16 - 18 mm), distinctive, light blue-gray moth that occasionally occurs in the most eastern portion of the Pacific Northwest. Its forewing has light-colored veins and dark transverse lines. The ground color of the forewing is light to medium blue gray with a light sprinkling of dark scales. The veins are lighter blue-gray, which produces a streaky look. The lines are charcoal gray, usually thick and prominent. All of the lines are present, including the median line. The antemedial line is thick and irregular, oriented nearly straight across the forewing. The postmedial line is weakly scalloped and smoothly excurved toward the margin. The subterminal line is pale and irregular. It is preceded by a thick, charcoal shade in most specimens that is thickest at the anterior margin. The terminal line is a series of triangular spots between the veins, which produces a scalloped look to the forewing margin. The orbicular and reniform spots are similar dark gray but variable. Both are filled with light gray, most evident when the adjacent median area is darker. When present, the orbicular spot is an elongate oval. Portions of the reniform spot are usually evident, especially the lateral outline. The hindwings are nearly white with a slight sheen. A light gray band is evident near the anterior outer margin and a gray terminal line is present in dark specimens. Most of the head and thorax are light blue-gray. A thick black band is present at the base of the collar. The dorsal portion of this band is arced so that the band is thickest in the middle and thin laterally. The male antenna is filiform.

This species can be easily identified by the combination of blue-gray color, light veins, dark transverse lines, and crescentic black collar.

This species is widely distributed on the dry short-grass prairies of the Great Plains, and barely enters the Pacific Northwest on open grasslands at low elevations in southwestern Montana.

Anicla tepperi is found near the Continental Divide in western Montana.

This species is found on the Great Plains and in the Rocky Mountains from southern Alberta and Manitoba to southern Colorado and northern Utah.

This species is a foodplant specialist feeding on grasses (Poaceae).

The adults are on the wing during the summer. Lafontaine (2004) gives the flight period as mid-June to early August. This species is nocturnal and comes to lights.