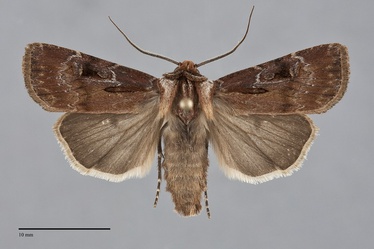 Agrotis vancouverensis is one of the most common and variable noctuid species in the western portions of the Pacific Northwest, although it occurs further east in the mountains. It is a medium-sized moth (FW length 13–17 mm) with a red-brown, yellow-brown, gray-brown, or wood brown forewing with or without a long black mark comprised of the fused basal dash and claviform spot and black in the cell. Lighter-colored forms have a darker costa, usually dark reddish brown, and the terminal area is often darker gray-brown. The transverse lines are dark gray but usually inconspicuous. The antemedial line is irregular; when visible, it forms a long laterally directed loop at the trailing margin. The postmedial line is dentate, usually with the tips of the "teeth" slightly darker than the rest of the line. The subterminal line is usually a series of pale spots, often preceded by gray to black triangular spots. A black mark comprised of the fused basal dash and claviform spot is the most prominent mark on the forewing when present. The cell between the orbicular and reniform spots is black or of the ground color;  one or more black lines can also be present at the lateral border of the reniform spot in some individuals that also have black in the cell. The orbicular and reniform spots are black with slightly paler inner line and filling of the ground color. The orbicular spot is usually slightly oval. The reniform spot is moderate-sized, kidney-shaped. The hindwing is light to medium gray, slightly darker at the margin with a faint discal spot and nearly concolorous two-toned fringe. The head is rich orange-brown in all forms. However, the thorax is almost as variable as the forewing, either fairly uniform of the forewing ground color or variegated with pale-tipped collar and light areas on the central tegulae. The male antenna is bipectinate with stout fasciculations.

The nominate subspecies flies in most of our area. The subspecies A. v. dentilinea which is smaller, is more uniformly gray-brown without many red-brown individuals, and has streakier forewings with dark veins and absence of strong black marks, flies in the Warner Mountains of south-central Oregon in our area. It also occurs in the high Sierra Nevada of California.

This variable species resembles several other Agrotis species with which it flies. Agrotis gravis, a Pacific Coast beach obligate species, differs in having a more oval orbicular spot with more conspicuous inner pale line than that of A. vancouverensis and a large reniform that is acutely pointed toward the forewing base at its posterior margin, unlike the kidney-shaped spot of A. vancouverensis. Both Agrotis obliqua, a species of high-elevation forest, and Agrotis antica, generally found in dry ponderosa pine forest, are both rich wood-brown in most of our area with sooty, dark gray to black costal margins, and they lack the gray colors found in A. vancouverensis. Populations of A. obliqua from the Rocky Mountains are more yellow-brown with a dark costa. Even predominantly brown forms of A. vancouverensis have gray color on the tegulae and an orange-brown head, both lacking in the other species. These species are much less variable than A. vancouverensis.

The type locality of Agrotis vancouverensis Grote is Vancouver Island. The following synonyms were also described from the Pacific Northwest: Agrotis clodiana Grote from Washington Territory, Agrotis semiclarata Grote from Washington Territory (by lectotype designation), Agrotis agilis Grote from Vancouver, and Agrotis atha Strecker from Seattle, Washington. Washed out forms of this species were called Agrotis aeneipennis Grote prior to the MONA revision (Lafontaine 2004). This name is now recognized as a synonym of A. vancouverensis.

Larva is smooth and pale gray with fine, black speckling.  It is illustrated by Lafontaine (2004).

This species is widely distributed in moist forest and grassland habitats throughout much of western North America.  In the Pacific Northwest, it is common to very abundant in moist coastal grasslands, native prairies, oak savanna, and oak woodlands at low elevations west of the Cascades, but is also common in open meadows at high elevations in the Cascades.  It is usually uncommon to frequent in coastal rainforests, mixed hardwood-conifer forests, and spruce-fir forests at low to high elevations, but may be very common in disturbed open clear-cuts of coniferous forests.  It is common in disturbed urban areas west of the Cascades, but appears to be mostly excluded from cultivated agricultural land.  However, it is rare in the Rocky Mountain region where it appears to be ecologically replaced by A. obliqua.

This species is most commonly collected along the Pacific Coast from southwestern Yukon Territory to southwestern California. The range extends across southern British Columbia to the Rocky Mountains where it is found south to southern Utah and eastern Arizona. This species appears to be absent from the drier interior Intermountain Region in southeastern Oregon, southern Idaho, and Nevada.

This species is a soil-burrowing cutworm that feeds on herbaceous vegetation in such families as Rosaceae and Fabaceae.

This species has a long flight period with records from late April to early August in the Pacific Northwest. It is nocturnal and comes to lights.