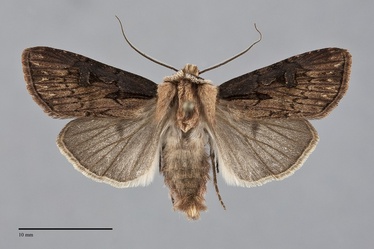 Agrotis obliqua is a common, warm dark brown (ochre brown in the Rocky Mountain region), medium-sized Agrotis (FW length 14–16 mm) that flies in high-elevation forest during the summer. Its forewing has a sooty gray costa and black markings. In addition to these features, the margin has dark gray opposite the cell and near the anal angle and the veins are thin and dark gray. The transverse lines are thin and black. The antemedial line is irregular and darkest near the costa. When visible, the posterior aspect is strongly laterally convex near the trailing margin. The postmedial line is dentate. The subterminal line is pale ochre, and zig-zag with a "W" mark to the outer margin on veins M3 and CuA1. A series of long, black chevrons precedes this line in most specimens and are largest and most consistently present opposite the cell. A black dash is joined to the black claviform spot, forming a prominent feature of the forewing. The orbicular and reniform spots are black and filled with the ground color. The cell between these spots is black; additional black lines are present beyond the lateral reniform spot is some individuals. The hindwing is medium gray, slightly lighter at the base in males, with slightly darker discal spot and veins and slightly lighter two-toned fringe. The head is warm brown. The collar is brown with a thin black transverse line separating darker basal and lighter distal portions. The thorax is lighter dull brown with dark margins on the tegulae. The male antenna is bipectinate and fasciculate.

This species exhibits geographic variation in our region. Those from the Rocky Mountain region, particularly the Wasatch Moutains of southeastern Idaho, are brownish ochre with darker costa and terminal areas rather than warm dark brown.

Agrotis obliqua if usually fairly easily identified in its high-elevation forest habitat but can be confused with Agrotis vancouverensis and Agrotis antica with which it flies at some locations. It is most similar to A. antica, which tends to fly slightly earlier in the year at lower elevations. This species is larger with duller and more uniform forewings and lighter hindwings in males. Agrotis obliqua has a shorter male vesica and female bursa than this species. Agrotis vancouverensis is very variable, but usually has some gray on the forewing or tegulae even in the brown forms that resemble A. obliqua. Its head is also warmer orange-brown than that of A. obliqua.

This species is widely distributed in boreal spruce-fir or quaking aspen forests across Canada and throughout the higher mountains of western North America.  In the Pacific Northwest, it is most common in spruce-fir forests along the summit of the Cascades and in the Rocky Mountain region at high elevations, but is also frequent in ponderosa pine and mixed conifer forests at middle elevations east of the Cascades.

This species is found in the mountains of the West, including the Sierra Nevada of California and the Rocky Mountains to Arizona. The range extends east in boreal habitats to Labrador and Nova Scotia.

No information is presently available regarding larval foodplants of this species, but it is probably a soil-burrowing cutworm that feeds on herbaceous vegetation based on related species.

Adults fly in mid summer. Pacific Northwest records are from May through August, with most records in July and August. It is nocturnal and comes to lights.