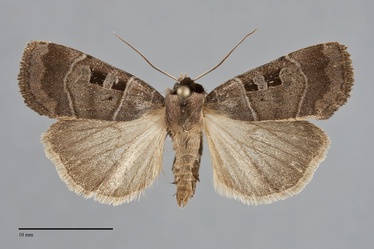 Agnorisma bugrai is an attractive, medium-sized (FW length 15 - 17 mm) moth with fairly broad forewings. The ground color of the thorax, forewings, and abdomen is purplish gray-brown. The top of the head and collar are black. The forewings are smooth and evenly colored except for the slightly darker postmedial area. The basal, antemedial, and postmedial lines are slightly darker filled with pale gray-brown and are very smooth without scalloping or abrupt angulation, while the pale subterminal line is uneven but faint. The orbicular and reniform spots are fairly large and filled with slightly lighter gray brown than the rest of the forewing. Their outlines are pale, but the spots are most evident due to silhouetting by black filling of the cell between the antemedial line and orbicular spot and between the orbicular and reniform spots. The dorsal hindwings are shiny medium gray with slightly darker discal spot and marginal area. The antennae of both sexes are filiform.

This species can be identified by the combination of a brown wing with smooth pale antemedial and postmedial lines, black in the cell medial to the reniform spot, and a thick black collar.

This species is widely distributed in forest habitats across much of central North America.  In the Pacific Northwest, it is sporadic in distribution, but is locally common in dry, open ponderosa pine forests and mixed hardwood-conifer forests at middle elevations along the east slope of the Cascades and in the Rocky Mountain region.

Agnorisma bugrai records are scattered in southern British Columbia, north-central Washington, and the Blue Mountains of Oregon. An apparently isolated population is found south of Olympia in the Puget Trough of western Washington.

This species has a transcontinental range. It is found in Canada from Newfoundland and southern Ontario to southern Northwest Territories to central British Columbia. The southern limits are Maryland in the East, Wisconsin in the Midwest, and Utah and Colorado in the West. It has not been found in Nevada or California.

Adults are single brooded and fly in late summer and early fall. Pacific Northwest records are from late July to mid September. It is nocturnal and comes to lights