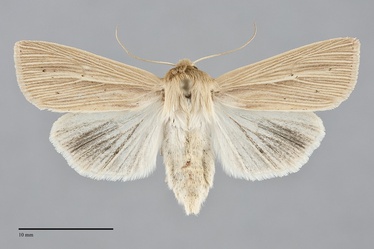 Mythimna oxygala is a very common, small (FW length 13–17 mm) streaked, straw-colored moth that flies in wet habitats with grasses from spring to fall. Its forewing has a few black dots and its pale hindwing is heavily suffused with dark gray. The outer margin of the forewing appears squared-off. The ground color is slightly reddish. The veins are pale straw-colored and each vein interspace has two similar thinner pale lines to produce a forewing pattern that resembles dead grass. The darker line between between the pale lines in each interspace is slightly darker and grayer than the spaces between the pale line and the adjacent veins. The cubital vein is the palest and thickest vein, and the area posterior to it is shaded with slight darker reddish to slightly gray color; a similar shade is also present distal to the cell. A crisp small black spot is present adjacent to the anterior cubital vein at the end of the cell. Similar spots are present on veins M1 and CuA2 at the position of the postmedial line, with very faint spots variably present on other veins along this line. The terminal line is a series of smaller black spots between the veins. The fringe is straw-colored. All other traces of lines or spots are absent. The hindwing is shiny, pale, and straw-colored with a heavy suffusion of dark gray scales, heaviest on the veins and sparing the margin. The fringe is white. The head and collar are pale straw, without transverse bands on the collar. The surface of the eye is hairy. The male antenna is bead-like.

Mythimna oxygala is similar to most species of Leucania. It can be told from all of them by the immaculate collar that lacks all transverse lines (present but faint in some Leucania species) and the dirty dark-gray suffusion on the central hindwing. Mythimna yuconensis, restricted to extreme northern British Columbia, resembles M. oxygala in size and shape but is darker on both wings. It is possible that it will prove eventually to be a northern segregate of M. oxygala. Mythimna oxygala is also similar to Neleucania praegracilis, a rarely collected species that occurs in southeastern Idaho in the Northwest. These species are similar in size with similar forewings, but the hindwing of N. praegracilis is copper-colored without dark suffusion. Several species in the tribe Apameini are small with streaked light tan or straw-colored wings, including species of Hypocoena and Benjaminiola colorada. They lack hairs on the eyes that all members of the tribe Leucaniini have. In addition, none have the precise pattern of black dots in the lower cell and on the postmedial line of M oxygala.

This species is common and widespread in our region. It occurs widely as far north as central British Columbia and is common on both east and west sides of the Cascade Range. It has been seldom collected in southeastern Oregon and southwestern Idaho and might not occur in the Basin and Range Ecoregions.

The range of M. oxygala includes much of North America except the deep South or extreme north. It has been found from the island of Newfoundland to North Carolina in the East, from Texas and New Mexico to northern Manitoba and Alberta in the center of the Continent, and most of California on the West Coast south of the Pacific Northwest.

This species is a climbing cutworm that is a specialist feeding on grasses (Poaceae) and sedges (Cyperaceae). Powell and Opler (2009) also give Aster (Aster spp., Asteraceae) as a foodplant

The adults can be collected throughout much of the year, appearing in the spring and flying until late fall. Collection records from the Northwest are most numerous from May until late September. This species is nocturnal and come to lights