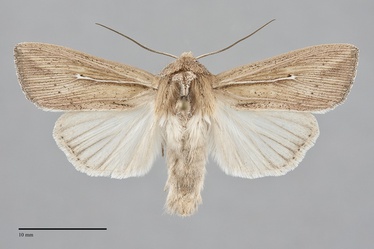 Leucania oregona is a pale, slightly reddish-gray-tan, medium-sized moth (FW length 15–16 mm) that flies in the western part of our region during the spring and summer. It has a longitudinally streaked forewing with pale veins, a black dot at the end of the cell, and a postmedial line of small gray dots, and a white hindwing with dots on the terminal line. The forewing is darker gray-brown along the cubital vein, mostly posterior to the vein, along the trailing margin near vein 1A+2A, and on the outer margin where it forms a vague triangular area from the apex to the end of the cell. The costa and trailing margin are often sprinkled with dark scales. The entire cubital vein is white. A small black dot is present anterior to the distal vein at the end of the cell. Two parallel pale lines are present in the interspaces between the veins. The postmedial line consists of a row of small gray spots on the veins that form a smooth excurved arc. A few specimens have tiny gray dots between the veins at the terminal line. The fringe is slightly grayer than the ground color.  All other lines and spots are absent. The hindwing is white with brown-gray veins, thin darker shading along the wing margin that is heaviest in females, and a series of black dots between the veins as the terminal line. The hindwing fringe is white with a pale yellow base. The head and thorax are similar to the forewing ground, with faint transverse barring on the distal collar and a weak tuft on the anterior dorsal thorax. The eye is hairy. The male antenna is bead-like.

This species is most likely to be confused with Leucania farcta, a common and widespread species west of the Cascades, and Leucania multilinea, an uncommon and local species that flies in salt marshes. Leucania farcta is reddish in color and lacks gray along the cubital vein. It has two dominant spots on the postmedial line and also has an off-white hindwing that lacks the black spots on the terminal line. Leucania multilinea is closer in pattern to L. oregona but has darker gray streaks on the forewing, two dominant spots on the postmedial line rather than a row of similar spots, and has a pale hindwing that lacks the terminal dots of L. oregona.

The type locality of Leucania oregona Smith is Oregon, Corvallis.

This species is widely distributed in grasslands, oak woodlands, and mixed hardwood-conifer forests at low to middle elevations along the West Coast.  It is particularly common on native prairies, oak savanna, and grass-covered headlands, but also occurs sporadically in coastal rainforests, mixed hardwood forests, and conifer forests at higher elevations in the Siskiyou and Cascade Mountains.

The range of this species extends south through California.

This species is probably a climbing cutworm feeding on coarse grasses (Poaceae) based upon closely related species.

This species is clearly double-brooded in the Northwest with well defined occurrence peaks in May and late August. In areas where L. oregona occurs with L. farcta the latter species flies between the two broods of L. oregona. Leucania oregona is nocturnal and comes to lights.