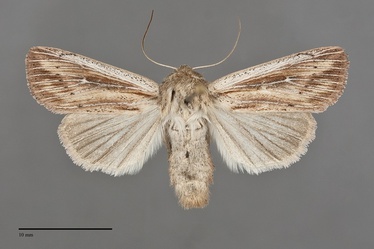 Leucania insueta is a medium-sized (FW length 15 - 16 mm), reddish-tan moth that flies in eastern British Columbia during the summer. It has a forewing with a light gray costa, white veins, an arcing line of black dots as a postmedial line, and a pale gray hindwing with a darker margin. This species and Leucania dia were considered to be the same species until recently (Schmidt and Anweiler 2010). The forewing is tan with red-brown streaks between the veins in the cell and on the distal wing. The wing immediately adjacent to the cubital vein, the distal costa, and the distal wing are darker brown to gray-brown, the latter strongest opposite the cell and in the fold. The veins are light gray, most prominently on the costa and on the cubital vein. A thin black basal dash is present. The postmedial line is a smooth arc of small, black dots or short lines on the veins. Occasional specimens have a gray or black dot at the posterior end of the cell at the distal cubital vein. The fringe is dark brown or gray-brown. The hindwing is pale whitish-gray at the base with a darker ill-defined gray marginal band and dark veins. The hindwing fringe is light gray. The head and thorax are gray-tan with faint gray transverse banding on the collar and edges on the tegulae. The eye is covered with fine hairs. The male antenna is filiform.

This species can be identified by its red-brown-, tan-, and light gray-streaked forewing with a postmedial line of an even row of spots in combination with a pale hindwing base. It is only likely to be confused with Leucania dia and Leucania commoides, both of which have gray hindwings. Leucania commoides is larger and has dark gray along the cubital vein and a postmedial line consisting of darker dots on the mid-forewing than at the anterior or posterior margins. Leucania dia, a very common and widespread moth in our area, was until recently confused with L. insueta (Schmidt and Anweiler 2010). It is smaller, darker gray on the forewing, and has a more uniform dark gray hindwing.

Leucania insueta has been found in a variety of forest, open forest with grass, and bog habitats in eastern British Columbia.

This species has been found in scattered localities in eastern British Columbia, including the Peace River District, the Rocky Mountain Trench, and near Nelson.

The range of L. insueta extends east to the Atlantic from our region. It occurs from Newfoundland to Washington, D. C. along the Coast and as far south as Oklahoma on the Great Plains. The western limits of its range are not well known due to confusion with Leucania dia.

This species is a foodplant specialist feeding on various grasses (Poaceae).

The flight period of the few specimens that are known from British Columbia is June and July. It has two broods in eastern North America, peaking in May and August (Forbes 1954). This species is nocturnal and comes to lights.