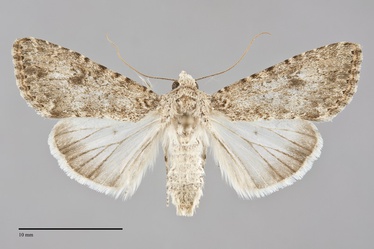 Tridepia nova is a small to medium-sized (FW length 13 - 17 mm), pale gray-brown moth that is limited to the southern Idaho and southeastern Oregon in our region. It has ill-defined, gray forewing markings that include a gray-filled reniform spot and a round to oval orbicular spot with a dark ocellus, and translucent pearly hindwings with a dark marginal band. The forewing is powdery gray-tan with a slight yellow tint, slightly darker gray distal to the postmedial line, especially in the subterminal area and in the terminal area opposite the cell. The basal, antemedial, and postmedial lines are medium to dark gray, double with filling of the ground color, darkest as paired dots on the costa. The basal line is darkest on the mid-forewing. The antemedial line is dentrate, with pale and gray lines on the teeth in the antemedial area, slightly angled toward the anal angle from the costa. The median line is gray, darkest at the costa and near the posterior margin. The postmedial line is weakly scalloped, with light and dark lines on the veins on the teeth in the subterminal area, smoothly excurved around the reniform spot and angled toward the base from the lower cell. The subterminal line is light yellow-brown, indistinct, evident only as the transition from the darker subterminal area to the lighter terminal area in some specimens. A series of dark gray spots or triangles between veins comprises the terminal line. The fringe is gray-tan, weakly checkered. The orbicular and reniform spots are gray, incomplete. The orbicular spot is round to weakly oval, filled with the ground or slightly lighter color and containing a gray ocellus. The anterior reniform spot is open to the costa and the remainder is broken into small segments. The spot is kidney-shaped or weakly hourglass-shaped, filled with the ground color peripherally and smudgy gray centrally and inferiorly. the claviform spot is absent or weak, gray. The hindwing is pearly white with a moderately well-demarcated gray marginal band that is darker in females, dark veins, and an absent or very faint discal spot. The hindwing fringe is white. The uniform head and thorax match the forewing color. Claw-like setae are present on the distal foretibia and the distal basal segment of the foretarsus. The eye is covered with fine hairs. A flat frontal tubercle is present. The male antenna is filiform.

This species is most similar to several Anarta species, paricularly Anarta mutata. Compared to T. nova, this species is darker on both wings, has a more sharply-defined yellowish subterminal line, and more distinct claviform and oval orbicular spots. Pale specimens of the common species Anarta trifolii could be mistaken for T. nova. The well-defined subterminal line, dark claviform spot, and darker hindwing that lacks opalescence of this species serve to distinguish it from T. nova. Anarta antica and Anarta decepta, two similar pale species that fly in deserts of southern Oregon, are whitish gray rather than tan, like T. nova.

The forewing pattern of this species suggests that it belongs in the genus Anarta.

This species flies in desert habitats at low elevations.  It is very rare in dry sagebrush steppe in Oregon.

Tridepia nova has only been collected in southern Idaho and in extreme southeastern Harney County, Oregon in our region.

This species is found in the Southwest, from central Colorado and New Mexico to central and southern California. It is a common species to the south of our region.

Tridepia nova has been collected in the late spring and August in our area. The small number of records are not sufficient to allow definitive conclusions, but it is possible that is might occur throughout the summer or could have early and late broods. This species is nocturnal and comes to lights.