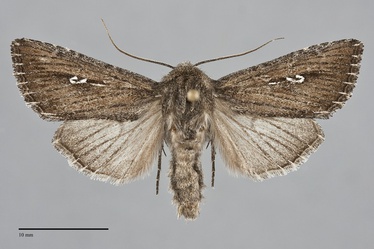 Sideridis u-scripta is a distinctive medium-sized moth (FW length 15 - 19 mm) that flies in habitat with sandy or pumice soils in early summer. It has a dark, warm, brown forewing with a U-shaped or fishhook-shaped white mark at the inferior reniform spot. The forewing has a slightly pointed apex. The costa is gray-brown, and a darker brown streak along the cubital vein along the lower cell extends toward the wing margin between veins M2 and M3. The veins are darker than the ground color except at the outer margin where they are white, extending into the fringe. A series of short, black lines are present at the position of the subterminal line in a few specimens, but the other lines are absent. A peculiar white mark is formed by the lower third of the reniform spot, otherwise nearly invisible, and usually also by the adjacent cubital vein along the distal cell. The hindwing is medium dark brown-gray, slightly darker toward the margin, with dark veins and discal spot. The head and thorax are uniform dark brown. The eye is covered with fine hairs. The male antenna is weakly beaded.

This species is unmistakable due to the combination of a the white inferior reniform spot on a dark brown ground.

This species is widely distributed throughout much of western North America in dry woodlands and prairie habitats.  In the Pacific Northwest, it is relatively common in juniper woodlands at middle elevations east of the Cascades, but is usually rare and sporadic on open sagebrush steppe at low elevations. It is associated with sand at most locations where it is found in the Columbia Basin and southeastern Oregon, but flies over pumice on Mt. Shasta in the Cascade Mountains of California.

Sideridis u-scripta is found in the central Columbia Basin near Potholes Reservoir. In Oregon, it occurs in the south-east in the Northern Basin and Range biome as well as in the Blue Mountains and along the east slope of the Cascade Range. It appears to be extremely local, and is likely tied to sand substrate or a particular foodplant.

This species is found in western North America. The range extends from the southern Prairie Provinces of central Canada to Colorado, southern Arizona, and the Sierra Nevada and northern Cascade Mountains of California.

Adults are single brooded and fly in early summer, earlier at low elevations than in the mountains. Records from the Pacific Northwest and northern California range from mid-May to mid-August.