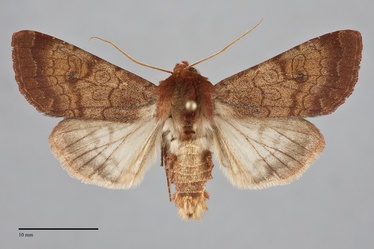 Sideridis rosea is a common, orange-brown, moderately sized moth (FW length 18 - 20 mm) that flies in a variety of habitats in our region during late spring and early summer. It has bright red-brown forewing margins, lines, and spots. The forewing is slightly powdery orange-brown. The most prominent markings are a dark red-brown median line, a similar continuous shade medial to the subterminal line, and the lighter red-brown terminal area. the basal, antemedial, and postmedial lines are red-brown, and single. The antemedial line is oriented obliquely to the wing and is drawn toward the base on the veins. The postmedial line is evenly scalloped and smoothly convex toward the outer margin. The subterminal line is pale, mostly evident as transition between darker and lighter shades of red-brown medial and lateral to it. The forewing spots are red-brown like the lines. The orbicular post is large and round with a small central ocellus. The reniform spot is moderately large and is kidney or weakly figure-eight shaped. The central portion is gray, darkest in the lower third of the spot. The claviform spot is fairly wide. The hindwing is pale white with a rusty hue toward the outer margin, red-brown veins, and a gray discal spot. The head and thorax are even dark red-brown. The eye is covered with fine hairs. The male antenna is bead-like.

This species can be recognized by its pattern of red-brown markings on a orange-brown forewing. It is unlikely to be confused with any other species in the Pacific Northwest.

This species is widely distributed in moist forest and riparian habitats along creeks and rivers throughout much of North America.  In the Pacific Northwest, it is frequent in mixed hardwood-conifer forests and riparian areas of the Cascades and Rocky Mountain regions at low to high elevations.  It is also common in coastal rainforests, mixed hardwood forests, and riparian areas at low elevations west of the Cascades. It is found in a variety of habitats at low elevations in the Columbia Basin.

Sideridis rosea occurs throughout most of our region south of southern British Columbia. It has been found throughout the Columbia Basin and adjacent foothills, including along the east slope of the Cascades and in the Blue Mountains in Washington and northeastern Oregon. It occurs west of the Cascades, widely in western Oregon but with a restricted distribution in the southern Puget Sound in Washington. It appears to be absent from southeastern Oregon and southern Idaho.

The range of this species extends east to the Atlantic where it is found from Nova Scotia to New Jersey. Its distribution in the West extends south to northern California, Nevada, Utah, and Colorado.

This species appears to be a generalist, feeding on many kinds of hardwoods.  Specific records include willows (Salix spp.) in the Salicaceae, currants (Ribes spp.) in the Grossulariaceae, cherries (Prunus spp.) in the Rosaceae, and buffalo berry (Shepherdia spp.) in the Elaeagnaceae.

This species is single-brooded and flies from late spring through early summer. Our records are from late April to mid-July. It is nocturnal and comes to lights.