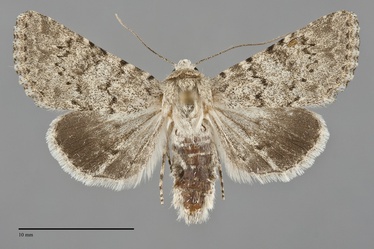 Scotogramma submarina is a rarely collected, small to medium-sized (FW length 14 -15 mm), powdery, light brownish-gray moth that occurs in southeastern Oregon in our region. Its forewing markings are limited to scalloped dark lines and it has a dark gray hindwing. The forewing color is nearly uniform, appearing powdery due to scattered dark scales. The dominant markings are a single black uneven antemedial line and the strongly scalloped postmedial line. The position of the subterminal line is evident by a preceding even gray shade at the costa in all individuals and more extensively across the entire wing in some specimens. A dark median line is usually present. The orbicular spot is very faint and is filled with the ground color. The reniform spot is also faint but it is usually filled with slightly darker gray centrally. The small claviform spot is often absent. The hindwing is medium-dark gray brown basally and dark gray distal to the thin dark postmedial line. The dark discal spot is V-shaped. The hindwign fringe is pale whitish tan. The head and thorax are uniformly of the forewing ground color. The eyes are covered with fine hairs. The male antenna is filiform.

This species can be identified, despite is relatively drab color, by the combination of pale ground color, dark transverse lines, and dark hindwing. Its forewing color and pattern are most similar to those of Anarta antica and Anarta decepta, but these species have a light hindwing with a darker marginal band unlike the sooty hindwing of S. submarina.

This species is widely distributed on the dry short-grass prairies of the Great Plains, extending west of the Rocky Mountains to very dry sagebrush steppe in the Great Basin region.  The species is rare and barely enters the Pacific Northwest in southeastern Oregon.

Scotogramma submarina has only been found at the base of the Pueblo Mountains in southern Harney County, Oregon in our region.

This species is found on the Great Plains and the Intermountain region. The range extends from the Prairie Provinces of Canada to Colorado, Utah, and eastern and southern California.

The adults of S. submarina are on the wing during the summer. They have been collected in July and August in our region. This species is nocturnal and comes to lights.