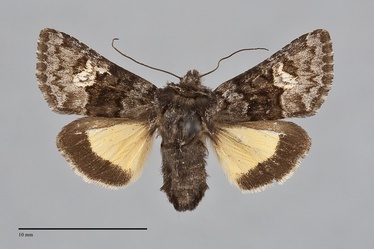 Coranarta macrostigma is a a small (FW length 10–11 mm), day-flying moth that flies in northern British Columbia during spring and early summer. It has black-banded yellow hindwings and dark and light gray forewings with a large white and gray-filled reniform spot. The forewing is charcoal gray with scattered lighter gray scales, darkest in the median area and lightest lateral to the postmedial line. The transverse lines are black and smooth in contour. The subterminal line is irregular with a W-mark on veins M3 and CuA1. The orbicular and reniform spots are black. The former is inconspicuous, but the reniform is very large with the posterior margin extending lateral to the postmedial line. It is filled with white and the central portion has extensive dark gray that is scalloped on the veins. The hindwing is bright yellow with a well-defined black marginal band. The hindwing fringe is white and weakly scalloped with dark gray. The head and body are black with a few white scales. The male antenna is filiform.

This species is only likely to be confused with Coranarta luteola, a more widely distributed northern species that is associated with bogs. The hindwing fringe of C. luteola is white without checkering, and its reniform is larger than that of C. macrostigmata with a C-shaped, rather than a scalloped, pattern to the gray filling.  The subterminal line of C. macrostigma is more uneven than that of C. luteola.

No information is presently available regarding habitat preferences for this species in the Pacific Northwest. Lafontaine et al. (1987) conjectured that this species might be associated with alpine habitats rather than peat bogs like C. luteola.  However, more recent collecting in Alberta and Yukon Territory suggests that it is found in dry upland habitat rather than above timberline.

Coranarta macrostigma is found in western North America, from Alaska and western Northwest Territories in the north to Colorado in the south.

Adults are strictly diurnal. They take nectar at flowers and have been observed at the flowers of bear berry (Arctostaphylos uva-ursi) by Gary Anweiler in Alberta and Andre Langois in southern Yukon Territory.  They are an effective bumblebee mimic.  This species is single-brooded and flies in spring and late summer.  The type series was collected during May and June.