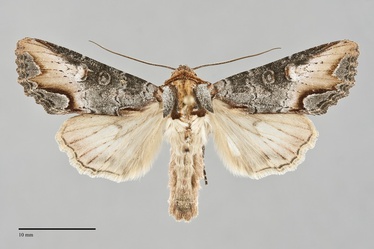 Admetovis oxymorus is one of three similar, moderate to large noctuid species (FW length of A. oxymorus is 19–21 mm) that fly in spring and early summer at low to middle elevation habitats east of the Cascade crest. These three similar species all have gray forewings with distinctive white and light tan markings on the distal forewing. The forewing ground color is mottled and powdery lead gray, including the terminal area. A small patch of tan scales is present at the anterior wing base, and a red-brown and tan line is located at the trailing margin from the base to the antemedial line. The subterminal area is white adjacent to the postmedial line blending to tan near the very irregular subterminal line. The median area lateral to the reniform is similar white, as is the filling of the reniform spot. The basal, antemedial, and postmedial line other than the portion opposite the reniform spot are dark gray, double, and filled with slightly lighter gray. These lines are relatively inconspicuous. The series of spots on the veins marks the position of the postmedial line across the pale portion near the reniform spot. The median line is absent. The subterminal line is white, preceded prominently by a dark red-brown shade that gradually widens from the apex to the trailing margin. The subterminal line starts at the outer margin below the apex, forms a very strong W-mark to the outer margin on veins M3 and CuA1. The moderately large, round orbicular spot is similar to the transverse lines. The reniform spot is dark gray and is filled with light white and a red-brown central crescent. The hindwing is grayish tan with dark gray veins, discal spot, terminal line, and submarginal shade. The head and central thorax are brown, while the tegulae are gray with brown medial edges. The male antenna is bead-like.

This species is closely similar to Admetovis icarus (not yet depicted on this site), a species that was first recognized and named in 2018.  Admetovis oxymorus is the more common and widespread of these moths, as A. icarus is largely restricted to high-elevation forests in the Cascade Range north of Snoqualmie Pass, north to south-central British Columbia, and east to the Rocky Mountains of eastern Idaho. Admetovis oxymorus differs in subtle detail of color and pattern. It is slightly lighter than most A. icarus, but is best told from it by the shape and color of the hindwing. That of A. oxymorus is off-white with tan and light gray mottling, and the border has a small but distinct concave segment. The hindwing of A. icarus is darker gray and the outer border is entirely convex or straight. Both A. oxymorus and A. icarus are also distinguished from Admetovis similaris by differences in hindwing color, which is pure white in A. similaris. Admetovis oxymorus flies slightly later in the season where these species occur together and is less likely than A. similaris to be found in open steppe habitats. Adults of A. icarus and differences in genitalia structure of the three Admetovis species are depicted in ZooKeys 788: 167–181 (open access on line).

Admetovis oxymorus is found in dry habitats throughout our area south of southern British Columbia. It is common in the foothills surrounding the Columbia Basin, but is not found in the dry interior of this region. Its range extends to extreme south-eastern Idaho in the Rocky Mountains.

The range of A. oxymorus extends from the Pacific Northwest south to California. It is replaced by Admetovis icarus in Utah and Colorado.

This species is a foodplant specialist feeding on elderberries (Sambucus spp.) in the Caprifoliaceae.

This moth is single brooded and flies in late spring and summer, usually a few weeks later than A. similaris where the two species occur together. Records from the Pacific Northwest are from late May to early August.