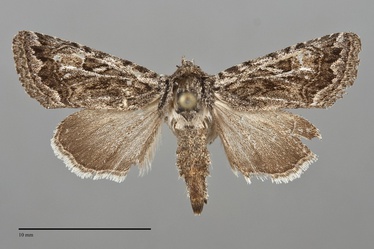 Ulolonche orbiculata is a small moth (FW length 10–13 mm) that flies in southern Idaho during the summer. It has a streaky, dark gray-brown forewing with the cubital vein and proximal branches contrasting white and a jagged interface between dark subterminal and light terminal areas. The forewing has a slightly pointed apex. It is powdery gray-brown and darker in the subterminal area, which is nearly black before the subterminal line. Some specimens are also darker in the antemedial area in the fold or have ill-defined darker scales between the veins from the base through the subterminal area. The trailing margin and terminal area are lighter, palest against the subterminal line. A blurred, black basal dash is present. The cubital vein and its branches proximal to the postmedial line are partially or entirely white, often with a larger surrounding white mark adjacent to the bases of M3 and CuA1. The basal and antemedial lines are black and most consistent on the costa, but the antemedial line is thick and black in the fold to form a wedge with the claviform spot. The postmedial line is double and black, filled with light brown, very smooth and sinuous, and forming a wide loop around the reniform spot with a short segment perpendicular to the trailing margin near the subterminal line. The subterminal line is pale, jagged, and zigzagged with two or more teeth toward the base. The terminal line is thin, black. The fringe is light brown like the terminal area. The orbicular spot is a very thin elongate oval, black filled with pale brown. The reniform spot is kidney-shaped traversed inferiorly by the pale cubital vein, black medially and without an outline elsewhere, filled with light brown. The claviform spot is variable, faint to solid black. The hindwing is brownish gray, darker toward the outer margin, with markings limited to the dark terminal line. The hindwing fringe is white with a yellow and gray base. The head and thorax are powdery gray-brown with dark edges on the tegulae. The male antenna is bead-like.

This moth can be identified readily by its small size, white veins on the mid-forewing, and toothed interface between dark subterminal and light terminal areas. It is unlikely to be confused with other species in our region.

The habitat preference of this moth is not known precisely for our region. It is suspected to occur in grass steppe or juniper woodlands based on the Northwest records.

Ulolonche orbiculata has only been found in southeastern Idaho in the Pacific Northwest.

This species is found on the western Great Plains, in the southern Rocky Mountains, and in the Intermountain region. It has been found from southeastern Alberta to the Texas Panhandle in the eastern part of its range, and occurs throughout the Four Corners States to eastern Nevada.

The larva of U. orbiculata is unknown.

The flight period of this moth is the summer. The few known Idaho records are from mid-June and early August. It is a nocturnal species that comes to lights.