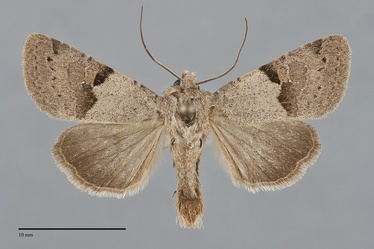 Ulolonche dilecta is a medium-sized (FW length 15 - 16 mm), tan moth that flies in Klamath County, Oregon during the summer. The forewing is divided into lighter basal and darker distal halves by a broad, black median line. The color of the base is even, pale tan lightly dusted with dark scales. The basal and antemedial lines are reduced to gray dots on the costa, and the orbicular and claviform spots are absent. The distal wing is powdery darker gray-tan with a dark patch on the costa medial to the subterminal line. The median line is black, oblique, and nearly straight, except for a concave inner contour that touches the lower reniform spot. The postmedial line is faint, gray, double filled with the adjacent ground. It curves near the costa and is nearly straight and perpendicular to the wing elsewhere. The pale subterminal line is preceded by a row of small black triangles between the veins. The terminal line is a faint row of tiny gray dots. The fringe is concolorous with the terminal wing. The reniform spot has a thin outline of black and white and is weakly constriced. It is filled with the same color as the ground anteriorly and darker gray in the lower third. The hindwing is dark brownish gray, slightly darker toward the margin, with a gray two-toned fringe and absence of other markings. The head and thorax are the same color as the wing base. The scales covering the male genitalia are long, forming a brush-like tip to the abdomen. The eye is sparsely covered with fine hairs. The male antenna is bead-like.

This species can be identified by its distinctive black median line that divides the wing into light basal and darker distal halves.

The figured specimen from Arizona might be Ulolonche disticha rather than U. dilecta.

No specific information is available regarding habitat preferences for this species in the Pacific Northwest.  This species is more widespread southward in California.

Ulolonche dilecta has been found in Klamath County, Oregon in the Northwest.

This species occurs in Nevada and California outside of our region.

No information is presently available regarding larval foodplants of this species, but related species feed on herbaceous vegetation and oaks.

Based on limited data, it appears that the adults fly during July in the Northwest. This species is nocturnal and comes to lights.