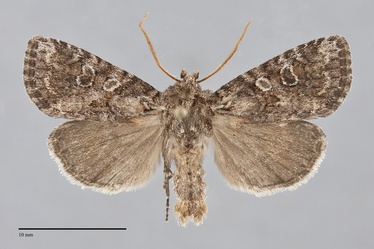 Orthodes detracta is a small, mottled, gray-brown moth (FW length 13 - 15 mm) that occurs in British Columbia and flies during the summer. Its forewing has a busy pattern that includes a strong, black, claviform spot and a weak basal dash. The forewing is relatively short and broad. The color is mottled gray-brown, often with a slight olive cast and rust-colored patches in the fold. The forewing base, apex, and fold region are lightest in color. A weak, black basal dash is present that thickens at the basal line in some specimens. The basal, antemedial, and postmedial lines are gray, double, and filled with the ground color or slightly lighter scales. The former two lines are irregular in shape, while the postmedial line is weakly scalloped and smoother in contour. The median line is variable, absent to dark from the costa to the lower cell. The subterminal line is pale brown, strongest near the apex, and irregular. It is preceded by a dark brown to gray shade and a series of small dark spots on the mid-forewing in some individuals. The veins in the terminal area are dark. The terminal line is a series of gray lines or triangles between veins. The tips of the veins are light brown in some specimens, often continued into the fringe as weak checkering. The orbicular spot is round to oval,  black in outline and filled with the ground color, slightly lighter brown, or light gray with a faint central ocellus. The reniform spot is kidney-shaped, with an outer black and inner light brown outline, and central filling of the ground color to light gray, similar to the orbicular spot. The claviform spot is thick black, apically pointed, large, nearly reaching the postmedial line. The hindwing is medium-dark to dark brown-gray with faintly darker gray discal spot, postmedial line, and veins in some specimens. The hindwing fringe is two-toned with slightly lighter edge. The head and thorax are mottled gray-brown with faint barring on the collar. The eye is hairy. The male antenna is weakly bipectinate with long curved cilia extending from the tip of each segment.

This species can usually be identified by its small size, mottled brown forewing, and large claviform spot. It is most likely to be confused with Orthodes goodelli, with which it occurs. Compared to O. detracta, this species has a smaller claviform spot, has less distinct lines and spots, and lacks a basal dash. The male antenna of O. goodelli is bead-like, rather than bipectinate.

This species is widely distributed throughout much of eastern North America in moist hardwood forest habitats.  It occurs in boreal forest in British Columbia.

Orthodes detracta occurs in eastern and central British Columbia and in southeastern Idaho in the Northwest. The most southerly occurrence in British Columbia is from the Cariboo Region north of Clinton.

The range of this species extends to the Atlantic from our area. It occurs from central Alberta to northern New Mexico in the West and southern Quebec and Nova Scotia to North Carolina and northern Mississippi in the East.

This species is a generalist feeding on many kinds of hardwoods, including birches (Betula spp.) in the Betulaceae, oaks (Quercus spp.) in the Fagaceae, huckleberries (Vaccinium spp.) in the Ericaceae, and serviceberry (Amelanchier spp.) in the Rosaceae.

A long flight season is reported for this species in the East, suggesting that it might be multiple-brooded there. It has been collected in early July in British Columbia. It is nocturnal and comes to lights.