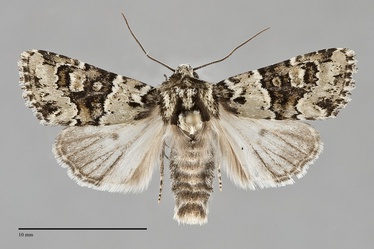 Lacinipolia strigicollis is a common, small moth (FW length 12 - 14 mm) that flies in dry steppe and forest habitats during the summer and fall. It has a mottled, light, greenish-white and dark gray forewing. The ground color varies from cream to light green, sometimes suffused with dark gray in males and usually darker gray in females. The basal area, median area, costal subterminal area, and terminal area are darker gray, often with the ground color showing in the posterior and distal median area and as mottling in the terminal area. A black basal dash is present. The veins in the terminal area are often gray, and a dark gray or black spot is often present in the fold. The basal, antemedial, and postmedial lines are black and white, double on the costa but only partially so on the rest of the wing. The basal and antemedial lines are irregular, toothed toward the base on the veins. The median line is gray, usually faint. The postmedial line is strongly dentate with the teeth of the black inner component extending across the lateral white component, sharply drawn toward the base on the costa, then slightly undulating with a strong oblique orientation toward the base across the rest of the wing. The subterminal line is an irregular series of white spots, preceded by a dark gray spot on the costa and a series of long black chevrons or wedges across the rest of the wing. The terminal line is a series of gray spots. The fringe is the ground color and dark gray. The spots are outlined in black. The orbicular spot is a small circle filled with the pale ground color or the dark gray of the median area. The reniform spot is ovoid or weakly hourglass-shaped, usually wider anteriorly, filled peripherally with a white line and centrally with the ground color, and a small, gray spot in the lower portion. The claviform spot is small and black. The hindwing is white to pale gray in males, darker medium gray in females, with slightly darker gray color and veins towards the margin. The hindwing fringe is white to white with a gray base. The thorax is cream to dark gray, usually mottled with speckled black transverse lines across the distal collar and along the edges of the tegulae. The eye surface is covered with fine hairs. The male antenna is bead-like.

This species can be recognized by its mottled cream or light green and dark gray color with light-filled spots and toothed black and white lines. It flies with Lacinipolia stenotis in the fall. This species is pure gray and white without yellow or green tints. Hecatera dysodea is an introduced, mottled yellow and dark gray moth that is spreading east of the Cascades in the Northwest. It is more bright yellow than green or cream and has patches of bright orange scales that are absent in L. strigicollis. Its hindwing has a wide, dark marginal band, unlike that of L. strigicollis.

Lacinipolia strigicollis is widespread in the dry interior of the Northwest as far north as south-central British Columbia. It is less common west of the Cascade Mountains, although it is fairly widespread in western Oregon. Further north it is found near the Gulf of Georgia in the rain shadow of the coastal mountains.

This species is widespread in the American West. It occurs from southern Alberta and western Montana to Texas and New Mexico. It is recorded from numerous localities in California and the Intermountain region.

This species is a climbing cutworm that feeds on various herbaceous plants in such families as the Asteraceae and Fabaceae.

Adults of L. strigicollis fly during late summer and fall, most commonly from mid-July to early September. The earliest records from our region are in early June. This species is nocturnal and comes to lights. This moth can be found taking nectar at the blossoms of rabbitbrush (Ericameria nauseosa, Asteraceae) in early evening when this plant is in flower.