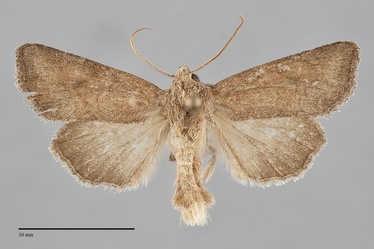 Lacinipolia meditata is a small, even, orange-brown moth (FW length 13 -14 mm) that flies in the eastern part of the Pacific Northwest during late summer. Its forewing has a blue-gray terminal area, and a faint, scalloped postmedial line, and a slightly pointed apex. The color in western populations is slightly powdery orange-tan, sometimes with a slight gray cast. The anterior wing is slightly darker and the terminal area is similar in darkness blue-gray. The distal veins are dark in some specimens. The forewing lines are slightly darker orange-brown. The basal line is absent or only evident on the costa. The antemedial line is variable, nearly absent to even. It is located far from the base, abutting the orbicular spot, excurved and angled toward the outer margin, toothed toward the base on the veins in most specimens. The median line is variable, absent, orange-brown, or gray-brown, angled 90° below the reniform spot, often irregular below the spot. The postmedial line is usually visible, evenly toothed on the veins, drawn toward the base on the costa, smoothly excurved around the end of the cell, and then nearly straight toward the base to the posterior margin. The subterminal line is obsolete, its location evident due to the transition in color at the base of the terminal area. The fringe is shiny orange-brown. The orbicular and reniform spots are outlined in faint orange-brown and filled with a slightly lighter shade of the ground color. The orbicular spot is round to slightly oval. The reniform spot sometimes lacks an outline, appearing as a pale spot. No claviform spot is present. The hindwing is light orange-tan, gradually darker gray toward the outer margin, with light gray-tan veins. The hindwing fringe is off-white with a gray-tan base. The head and thorax are orange-tan. The eye is covered with small hairs. The male antenna is strongly biserrate.

This species can be recognized by its powdery orange-brown forewing with a pointed apex and reduced markings. Lacinipolia lorea is similar in color but has a broader wing-shape, more mottled color, and stronger pattern of lines and spots. Protorthodes curtica has a similar long forewing but is usually redder or darker brown and also has a better-defined pattern.

Populations of this species from eastern North America are darker brown than those from the West.

This species is widely distributed in moist forest and grassland habitats throughout much of eastern North America, extending westward to the Rocky Mountains.  It is rare and sporadic in the Pacific Northwest.

Lacinipolia meditata is restricted to the eastern part of the Northwest. It has been found in southeastern British Columbia and eastern Washington.

The range of this species extends east to the Atlantic Coast. It is found along the east slope of the Rocky Mountains from central Alberta to Colorado, then east to Nova Scotia to northern Florida.

This species is a climbing cutworm that feeds on many kinds of herbaceous vegetation such as the families Asteraceae and Fabaceae.

The flight season of L. meditata is late summer and early fall, typically from July to September in most of its range. It is nocturnal and comes to lights.