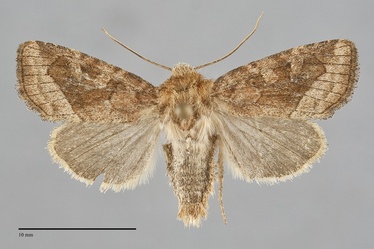 Lacinipolia lorea is one of only a few Lacinipolia species that is entirely orange-tan without gray markings. It is a small moth (FW length 12 - 14 mm) with a darker median area that is set off from the lighter terminal forewing by a even, oblique postmedial line. The forewing is slightly mottled orange-tan, sometimes reddish or duller gray-tan, darker and richer brown in the median area, and darker and grayer on the costa in the subterminal area. The distal veins are dark. The basal, antemedial, and postmedial lines are dark orange-brown. The antemedial line is excurved, drawn inward on each of the veins. A faint median line is usually evident, bent sharply at the reniform spot. The postmedial line is even or very finely toothed on the veins, drawn sharply toward the base on the costa, smoothly excurved near the costal margin, and then nearly straight and oblique toward the wing base posterior to vein M1. The subterminal line is pale but faint, mostly evident due to a preceding orange-brown or gray shade, offset below the apex and then nearly parallel to the outer margin. A thin, dark terminal line is present. The fringe is slightly darker and grayer than the terminal area. The outlines of the spots are similar to the forewing lines, sometimes with a broken, inner pale gray line in the reniform spot. The orbicular spot is round or ovoid, filled with the ground color. The reniform spot is weakly hourglass-shaped and filled with the ground color, except gray at the lower end. The claviform spot is absent or very small. The hindwing is tan and suffused with gray, with a slight brassy sheen and light orange-brown fringe. The head and thorax are orange-tan, similar to the forewing. The eye surface is covered with fine hairs. The male antenna is bead-like.

This species can be recognized by the mottled, light orange-brown color with a darker median area, a postmedial line that is even and straight, following the anteriorly located bend near the costa, and a gray hindwing with light orange-brown fringe. Lacinipolia meditata, a species that is confined to the eastern part of our region, is a similar color in the West, but has a more pointed forewing shape and lacks distinct lines. Many similarly colored moths are members of the tribe Apameini, such as Amphipoea americana, and therefore lack hairs on the eyes. Most of them differ in details of maculation, including the contour of the postmedial line.

This species is widely distributed in moist forest and grassland habitats throughout much of eastern North America, extending westward through the Rocky Mountains.  In the Pacific Northwest, it is moderately common at middle elevations in mixed hardwood-conifer forests and open ponderosa pine forests of the Rocky Mountain region.

Lacinipolia lorea is found in the Rocky Mountain region and is absent from the western portion of the Pacific Northwest. Records from Washington and Oregon are from the eastern parts of both states. It is more widely distributed in eastern and central British Columbia.

This species is widely distributed across North America to the East Coast. It occurs across southern Canada to the island of Newfoundland and south to Utah, Colorado, Missouri, and Virginia.

This species is a climbing cutworm that feeds on various kinds of herbaceous vegetation such as the families Asteraceae and Fabaceae.

This species is single-brooded and flies during the summer. Records from our region range from late May to mid-July. It is nocturnal and comes to lights.