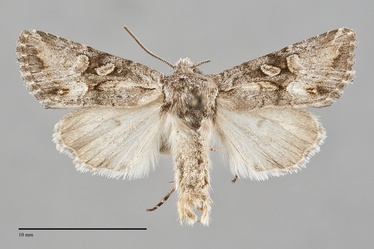 Lacinipolia longiclava is a small, light gray and tan moth (FW length 11 - 12 mm) that flies in western Montana in the spring and early summer. Its forewings have pale blue-gray in the subterminal area, black-rimmed spots, and a double gray mark at the anal angle. Most of the forewing is light gray, lightest and blueish in the posterior antemedial area, and in most of the subterminal area. A white streak in the fold is evident in the antemedial and subterminal areas. The median area is medium gray with a warm, tan tint. The costa in the anterior subterminal area and in most of the terminal area (except the apex) are medium gray. An oblique, pale, tan area extends from the apex to the anterior subterminal area. A double, dark gray mark at the anal angle is comprised of a gray subterminal area spot and a darker gray line in the terminal area separated by the pale subterminal line. A very thin, black and white basal dash is present. The forewing lines are gray, partially double at least on the costa and variably so elsewhere, and filled with light gray that is lightest in the posterior postmedial line. The basal line is barely evident on the costa. The antemedial line is faint, usually evident as a gray arc at the base of the claviform spot and on the costa. The median line is gray dark from the costa to the cell and absent elsewhere. The postmedial line is also faint and is weakly scalloped, which is evident in the gray filling around the reniform spot and in the concave transition between the pale subterminal spot and the gray median area below the spot. The subterminal line is evident as a pale yellow or white mark separating the two dark marks above the anal angle that are described above, and is only evident as the transition between dark and light between the subterminal and terminal areas elsewhere. The male antenna is bead-like. The orbicular spot is ovoid or teardrop-shaped, rimmed in thin black, and filled with white peripherally and the ground color centrally. The kidney-shaped reniform spot has a thin, black medial wall, lacks an outline laterally, and is filled with light gray peripherally and light tan centrally. The claviform spot is long, reaching the postmedial line, and darkest at the tip. The hindwing is pale whitish-gray in males and tan-gray in females, with a slightly darker discal spot and a thin terminal line. The hindwing fringe is white with a pale gray base. The head and thorax are powdery gray with scattered black scales. The base of the collar is tan, with a black line separating it from the gray edge. The eye is covered with fine hairs. The male antenna is filiform.

No information is presently available regarding habitats of this species in the Pacific Northwest. It is most likely found in grasslands, based on its short-grass prairie distribution outside of our region.

Lacinipolia longiclava has been recorded from western Montana. It is not known from other parts of the Pacific Northwest.

This species is found in the western Great Plains. It has been recorded from east-central Alberta and Saskatchewan to Colorado.

The flight period of this species is in late spring and early summer. Most records are from May and June across its entire range.