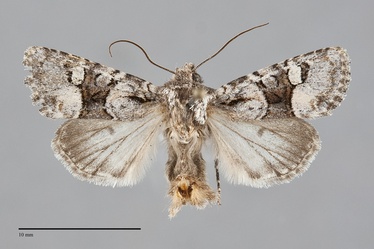 Lacinipolia bucketti is a small, light blue-gray and dark gray moth (FW length 11–12 mm) that is restricted to the immediate Pacific Coast of Oregon and flies during the summer. Its forewing has a rosy pink patch in the subterminal space near the anal angle. The forewing is light gray, basal and distal to a charcoal gray median area, medium-dark basal to the antemedial line, lighter blue-gray in most of the subterminal area and at the apex, and darker gray on the costa in the subterminal area and in the remaining terminal area.  The costa has a striped appearance, due to the double lines with light filling.  A rosy suffusion is present on the base and in the posterior subterminal area, most evident near the anal angle in most specimens. A short, black basal dash is present. Females are darker than males, especially on the wing base.  The basal, antemedial, and postmedial lines are gray, black, and double, the latter two lines with strong components abutting the median area.  The filling of the lines is gray, wider and nearly white in the posterior half of the postmedial line.  The basal line is irregular, which is evident anterior to the basal dash. The antemedial line is smoothly arced toward the outer margin with the apex near the posterior margin.  The median line is gray, nearly straight, or slightly concave toward the base.  The postmedial line is sharply drawn toward the base on the costa, has a short, straight segment that is slightly angled toward the base from a bend below the costa to the lower reniform spot, and then is smoothly concave toward the base from the spot to the posterior margin. The subterminal line is pale gray, palest and widest near the anal angle, slightly irregular. It is preceded by a thin, gray shade across most of the wing, wider rosy pink in the fold.  The terminal line is a series of gray spots.  The fringe is checkered gray.  The spots are outlined in black.  The orbicular spot is round or ovoid, filled with light to medium gray, similar to the wing base color, usually slightly darker centrally.  The reniform spot is bar-like, weakly kidney-shaped, filled with whitish gray, and slightly darker centrally.  The claviform spot is ill-defined, often appearing as a black line across the median area. The hindwing is pale gray, gradually darker gray toward the margin, with dark veins and discal spot. The fringe is pale gray with a gray base. The head and thorax are gray with light blue-gray collar edge and central tegulae and a light brown tuft posteriorly. The eye is covered with tiny hairs. The male antenna is bead-like.

This species should only be considered for specimens from the immediate Pacific Coast.  It can be recognized by the light blue-gray and pink subterminal area and the smooth pale-filled posterior postmedial line that has a new-moon shape.  It is most similar to Lacinipolia olivacea in our area and might eventually prove to be a coastal subspecies of it.  Lacinipolia olivacea from west of the Cascades are typically very dark, nearly black in the median area, and lack the blue-gray color of the other parts of the wing that are typical of L. bucketti.  Lacinipolia davena, a widespread and common moth in the Northwest, is similarly patterned, but also darker.  It usually has a tuft of rusty red-brown scales on the posterior thorax unlike L. bucketti.  Lacinipolia quadrilineata, a species that is widespread in western Oregon, is variable, but usually has a pale hindwing with a black wedge-shaped mark near the anal angle that is lacking in L. bucketti.

This species is narrowly endemic to coastal habitats along the West Coast near the Pacific Ocean.  In Oregon, it appears to be mostly limited to coastal grasslands adjacent to the ocean, but may be locally common in this restricted habitat.

Lacinipolia bucketti is closely tied to the immediate Pacific Coast. It has been found in southern and central Oregon as far north as Grays Harbor County, Washington.

The range of this moth includes the coast of northern California, Oregon, and Washington.

The larva of L. bucketti is unknown. Based on the habits of closely related species, it is probably a climbing cutworm that feeds on many kinds of herbaceous vegetation.

Lacinipolia bucketti is single-brooded, and the adults fly during the summer. They have been collected in July and August. They are nocturnal and come to lights.