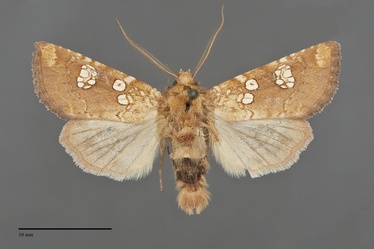 Hydroeciodes serrata is an orange and yellow, medium-sized moth (FW length 14 - 16 mm) that flies in the mountains of southeastern Idaho during late summer. It has large, white-filled orbicular, claviform, and reniform spots with a net-like pattern in the reniform spot. The ground color is dull orange, more yellow toward the base, especially along the trailing margin, and in a patch in the apical terminal area. The lines are darker burnt orange, double and filled with yellow, strongest at the costal margin. The costa is striped yellow and orange near the reniform spot. The antemedial line is irregular, and the light filling is most prominent at the base of the claviform spot. The postmedial line is thin, scalloped, and nearly parallel to the outer margin. The pale, subterminal line is incomplete, and the subterminal and terminal areas are similar in color, except near the apex. The fringe is similar in color to the terminal area or slightly darker. The three spots are the dominant feature of the forewing. All are outlined in dark orange-brown and are filled with creamy white. The orbicular and claviform spots are similar and round, with dark, orange centers. The reniform spot is large and weakly kidney-shaped. It has a central lunule with orange outline and yellow center, and the veins are dark orange where they traverse the spot producing a fishnet pattern. The hindwing is light grayish-orange with gray veins and a slightly lighter fringe. The head and thorax are similar to the forewing in color. A median tuft is present posterior to the collar. The surface of the eye is covered in fine hairs. The male antenna is strongly bipectinate.

This moth is strikingly similar to several species of Papaipema in the tribe Apameini. They are most easily distinguished by examining the eye under magnification, since those of Hydroeciodes are covered with fine hairs that are lacking in the Apameini. The males of these species can also be separated by the width of the antennae, much wider in H. serrata than in the Papaipema species. The forewing pattern of H. serrata has more yellow and orange-brown banding on the costa distal to the reniform spot than the Papaipema species, its postmedial line is scalloped rather than smooth, the pale claviform spot is round rather than figure-eight shaped, and the medial side of the reniform spot is convex toward the base rather than concave as in the Papaipema species. The apical forewings of Papaipema have a slight hook-tip that Hydroeciodes serrata lacks.

Hydroeciodes serrata has been collected in mid-elevation forest in the Pacific Northwest. It has been reported from a number of different habitats by Powell and Opler (2009).

This species is restricted to southeastern Idaho in the Northwest where it has been collected in the Wasatch Mountains.

Hydroeciodes serrata is found in the Rocky Mountain and western Great Plains regions from southern Alberta and Montana to Colorado, New Mexico and Texas.

The early stages of this species are unknown.

The adults of this species fly in late summer. They have been collected in August in our region.