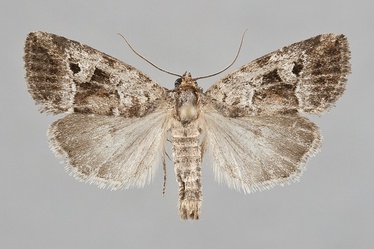 Elaphria alapallida is a distinctively patterned, small gray, red-brown, and ochre moth (FW length 11 - 12 mm) that occurs in British Columbia in our region and flies during the summer. It has a large pale gray reniform spot that is open toward the costa and outlined by black in the cell and red-brown in the lower median area. The pale gray ground color is present medial to the antemedial line, along the costa from the base to the postmedial line, at the anal angle, and in the reniform spot. The median area and the mid subterminal area are red-brown, an ochre patch is present at the costa preceding the subterminal line, and the terminal area is dark gray. The filling of the cell is black between the orbicular and reniform spots and lateral to the reniform spot. The antemedial and postmedial lines are gray, double, and filled with light gray. Both lines are fairly smooth and are oriented perpendicular to the long axis of the wing. The subterminal line is pale ochre but incomplete. The orbicular spot is small, round, and filled with slightly lighter gray than the ground color. The reniform spot is large, black with an inner white line, and filled with the ground color. It is deeply indented laterally, its anterior portion is open to the costa, and it is most evident due to the darker areas surrounding the lower two-thirds. The claviform spot is small, black, and variable filled with ochre, gray, or red-brown. The hindwing is pale gray, gradually darker toward the margin, with a barely evident discal spot and pale two-toned fringe. The head is orange-brown, the collar is red-brown, and the remainder of the thorax is gray. The male antenna is filiform.

This species can be identified from other similar sized moths by the distinctive multicolored forewing with a large gray reniform spot that is open to the similar gray costa. The ochre patch near the apex of the forewing and the burnt orange head are also typical of this species.

This species has been found in dry transition zone conifer forest in southwestern British Columbia.

Elaphria alapallida has been collected in central and southwestern British Columbia in our region.

This species occurs across the width of the Continent and is most widespread in the East. The range extends eastward through the southern Prairie Provinces of Canada. The range in eastern North America extends from Newfoundland and adjacent Quebec south to North Carolina is the Appalachian Mountains