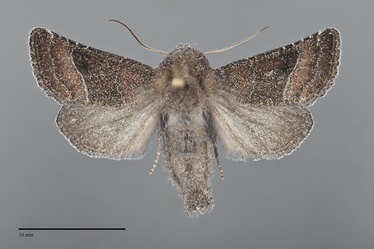 Selicanis cinereola is a rarely-collected fall-flying medium-size moth (FW 12–13 mm; n = 5) with powdery forewings with dark brown and orange brown areas separated by smooth pale transverse lines. The forewing apex is pointed slightly. The color is even, orange brown basal to the antemedial line and in most of the subterminal area and darker gray brown in the medial area and from the distal postmedial area to the fringe. The entire wing appears dusted or frosted with paler scales. The antemedial and postmedial lines are dark with whitish filling, smooth. The antemedial line is arced evenly distad, while the postmedial line is arced around the cell on the anterior half of the wing and is straight or slightly concave basad posterior to the cell. The subterminal line is similarly prominent near the costa and less conspicuous elsewhere, sinuous, with a dark preceding shade similar dark color as the terminal area. A series of small whitish dots are evenly spaced on the costa between the postmedial and subterminal lines. The reniform stigma is a transverse bar, barely evident, surrounded by slightly darker scales than the rest of the medial area. The hindwing is medium to dark brownish gray, slightly darker distally, with a barely evident discal spot. The head and thorax match the more orange portions of the forewing and are similarly dusted with pale scales. The eye lacks hairs. The male antenna is beadlike.

This moth is distinctive and is unlikely to be confused with other species in the Pacific Northwest. The most similar species is Plagiomimicus spumosum. Its antemedial and postmedial lines are angled sharply on the anterior third of the wing, not smooth like those of S. cinereola. Dark specimens of Lacinipolia stricta or Protorthodes curtica are similar dark brown and also fly during the fall, but both species have much more irregular lines and conspicuous spots than S. cinereola. In addition, the eyes these eriopygine noctuids are covered with fine hairs, visible under high magnification, that are lacking in S. cinereola.

This moth is associated with barrens in most of its range. Its only known locality in the Pacific Northwest is partially stabilized forested dunes with scattered junipers and cherry thickets. It was not found on nearby open dunes.

This species has only been encountered once in the Pacific Northwest, in the extensive St. Anthony dunes area in east-central Idaho.

The range of S. cinereola is the Great Plains of central North America as far east as Wisconsin and north to North Dakota and Montana.

The early stages are unknown. Although its tribe assignment is still unsettled, this moth is at present assigned to Apameini and might be related to Papaipema, a genus of borers in woody and non-woody plants. If so, the larva of Selicanis might be a borer. A potential host is choke cherry (Prunus virginiana) which is common at several sites where the moth occurs; however, this is a common and widespread plant and the association is far from certain.

Adults fly during fall and have only been collected during mid-September in the Pacific Northwest. The moth is nocturnal and comes to lights.