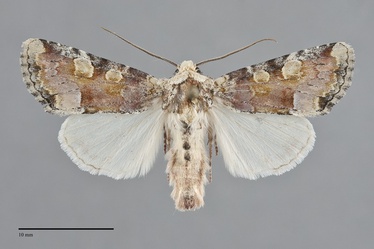 Oligia violacea is a gorgeous, medium-sized moth (FW length 15–17 mm) that flies east of the Cascades during the summer. It has a bright red, violet, yellow, and gray forewing, and a pure white hindwing. The outer margin is lightly scalloped. The ground color is red, slightly mottled with yellow and violet. The costa is ochre in the basal and terminal areas and dark gray to powdery dark blue elsewhere. The subterminal area is dark red on the costa, gradually increasing light blue, and violet toward the posterior margin. The terminal area is light yellow and gray with short black lines on veins M2 and CuA2, light yellow or light blue at the apex. The lines are weak gray or red, filled with light violet, except as noted below.  The basal line is filled with yellow, evident on the costa. The antemedial line is transversely oriented and zigzagged on the veins. The median line is gray on the costa and red near the trailing margin. The postmedial line is scalloped, weak around the end of the cell where it is nearly straight and angled toward the outer margin posteriorly, stronger gray and light blue on the posterior wing where it is perpendicular to the trailing margin. The subterminal line is light yellow, offset below the apex and slightly irregular elsewhere. It is preceded by a diffuse red shade. The terminal line is black, thicker between the veins. The fringe is checkered light gray and ochre. The orbicular and reniform spots are partially outlined in thin gray and yellow, slightly darker centrally. The orbicular spot is round. The reniform spot is broadly kidney-shaped to oval and contains a red or gray inferior spot. The red-rimmed claviform spot varies from absent to weak. The hindwing is pure white except for a thin gray terminal line. The head and collar are light yellow; the rest of the thorax is mottled ochre, orange, and gray. The posterior thorax and abdominal segments bear weak tufts. The male antenna is strongly beaded to weakly biserrate.

This beautiful moth can be identified by its multicolored forewing and pure white hindwing. Oligia rampartensis is similar, but has a darker hindwing with gray veins and red mottling in the marginal area.

This species is widely distributed throughout much of western North America in low elevation wetland habitats, including the edges of marshes, lakes, and the riparian zone along creeks and rivers.  These habitats are usually within oak woodlands west of the Cascades, and in ponderosa pine forests, juniper woodlands, or steppe east of the Cascades.  It tends to be uncommon.

This species has a limited distribution in western North America. It is found throughout California, Nevada, and Arizona to the south of our region.

This species is a foodplant specialist that bores into the stems of rushes (Juncus spp.) in the Juncaceae.

The flight period of O. violacea is the summer, beginning in late June and lasting until late August. It is nocturnal and comes to lights.